I took this photograph of Hamisu Iyan-Tama a few months ago when I went to his office in Kano for an interview.

The following story appeared on page 4 of yesterday's issue of LEADERSHIP:

* My trial is a vendetta - Iyan-Tama

The magistrate court No. 14 of Normansland area in Kano will today open hearing on the bail application filed by a leading movie producer, actor and politician, Alhaji Hamisu Lamido Iyan-Tama, who was remanded in police custody on the order of the court on Saturday.

The prosecutor of the two charges against Iyan-Tama, who is also the resident counsel of the state Censorship Board, Malam Sunusi Ado Ma'aji, told the court that Iyan-Tama was arrested by the police in Kano on the alleged offences of releasing a movie, 'Tsintsiya,' in Kano without censorship and failure to register his production company with the Kano State Censorship Board.

The producer, who is a former president of Arewa Film Producers Association of Nigeria (AFPAN), was also the state gubernatorial candidate under the New Democrat Party in last year's general elections.

The court, presided over by Judge Mukhtar Ahmed, is a special mobile court created to try cases relating to the Hausa film making business.

'Tsintsiya' was funded by the United States Embassy in Nigeria to highlight the problems of ethnic and religious crises that bedevil the north.

During the trial, the charges were read to the accused person by the registrar of the court, Malam Yahaya Isyaku, who stated that on or about 10th of May 2008 Iyan-Tama was found to have released 'Tsintsiya' without having it censored by the Kano State Censorship Board, an offence contrary to section 16 of the Kano State Censorship Board law and punishable under section 16b of the same law enacted in 2001.

The second charge says that Iyan-Tama was on or about the 10th of May 2008, at about 5pm at Sharada phase 1, found to be operating a film production company named Iyan-Tama Multimedia, without obtaining a requisite license from the censorship board, an offence under section 81 of the Kano State Censorship Board and punishable under section 112 of the same law.

Counsel to the accused person, Malam Auwal Yaro Gabari, applied for bail under section 341 of the Criminal Procedure Code (CPC) and section 36 of the 1999 constitution, saying the alleged offences were bailable ones, whether an accused person applied for it or not.

The judge refused to grant the bail and ordered the remand of the accused person in police custody until Monday, May 12.

He also fixed May 15 for hearing on the case.

The arrest of Iyan-Tama has once again brought to the fore concern about the fate of movie-making in Kano State. Film makers have been having a running battle with the censors board, which has jailed or persecuted actors and marketers, since last year.

Hausa film making, which has a nucleus in Kano, was banned in the state by the censors board for six months until last February following the appearance of the infamous 'Hiyana' video clip which featured an actress in a steamy sex scene with a Lagos-based bureau-de-change operative. The clip was made with a cellphone camera.

Director-general of the board, Malam Abubakar Rabo Abdulkarim, had told LEADERSHIP in a previous interview that the measure was taken in order to sanitise the fim making business in the state in accordance to the state's Sharia laws.

But relations between film practitioners and the state government have worsened in the recent past as movie makers migrated to other states to shoot and sell their films, believing that the censors board was deliberately killing their business. They see the arrest of Iyan-Tama as a continuation of the war waged against them.

A leading actor, Adam A. Zango, was jailed earlier by the same mobile court for months on the charge of releasing an uncensored dance movie. Two actresses were detained and sent packing from a house they rented on the charge that they were living alone without husbands.

Film marketers were also jailed for circulating an uncensored movie trailer.
The president of Motion Pictures Practitioners Association of Nigeria (MOPPAN), Alhaji Sani Mu'azu, is pursuing a court case against the censors board for its banning of his movie, 'Hafsah'.

Our correspondent gathered that up till the time of the arrest of the famous producer, movie practitioners in the state and the censorship board had had an agreement that no stakeholder in the movie business would ever be arrested until an ongoing dialogue over the crisis between them was resolved.

In an interview with the producer at the Normansland police station where he is being held, Iyan-Tama told LEADERSHIP last night that he was arrested by policemen at his office in Sharada quarters at 4 o'clock pm on Saturday.

"They came without an arrest warrant. When I insisted that they should show me a warrant, one of them warned that I could be shot or beaten up right there and then if I did not follow them to the court. So I went.

"Later, I learnt that three CDs of my movie were found in the office of someone, which the police broke into."

He added that his trial was political, designed to humiliate him due to his criticism of the government of Malam Ibrahim Shekarau.

He said: "The whole issue of my arrest is political, designed to humiliate me. You know, I contested the election against Malam Shekarau last year. Since then I have openly opposed some of his policies, which is in the interest of the good people of Kano State. And they know I still intend to contest the governorship election in 2011.

"But even though I disagree with them over the censorship laws, I refused to break any law. I shot the movie in Kaduna to prove that I am law-abiding. The US embassy premiered it in Abuja. And the film is not on sale anywhere in Kano. My production company was registered with the Corporate Affairs Commission. I decided not to renew my registration with the state censorship board because I have secured an office in Abuja, where I am planning to move.

"So obviously they just want to break me in order to scare away all those opposed to them."
Posted by Bahaushe Mai Ban Haushi! at 16:48 2 comments:

Another feather in my cap! 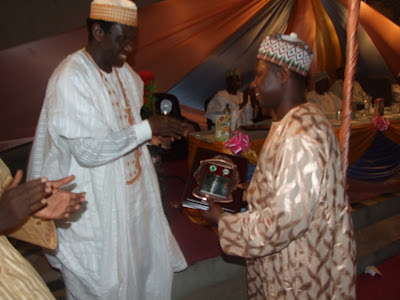 In this photo, taken by Abdu'azeez Fagge, I am receiving my award from Nigeria's former Minister of Information and National Orientation, Prof. Jerry Gana.

Last Tuesday night, May 6, 2008 I was one of the distinguished Nigerians honoured with an honorary award by the Association of Nigerian Authors (ANA), Niger State chapter, for contributions to the development of literature in northern Nigeria. It was at the maiden edition of the Northern Nigerian Writers Summit, a big event held before a large crowd in Minna, the state capital. It was reported by virtually all the leading newspapers in the country. This came only a few weeks after I was honoured with a similar award by the Bayero University Alumni Association.

As with the BUK award, in this particularly award I was the youngest recipient.