Slowly and inexorably, the north is becoming like Somalia. The only small difference between us and Somalia is that whereas the latter has spent decades without a functional government, there are structures on the ground and people in the north whom we call leaders. Nevertherless, Compared to the south, the north as a political entity is fast sliding back into prehistoric times in terms of development and, indeed, worse than the colonial times in terms of home-grown violence. The situation is so bad that many a frustrated northern youngster is yearning for the British to return and recolonise the country in order to bring back the halcyon times. The solution to our problems is, of course, far from recolonisation. But if it isn’t, then, what is?

For the north, there have been four epochs in the march to (or away from) civilisation. There was the precolonial time when our forefathers engaged in internecine wars and the self-immolating practice of slavery. But then, in parts of the north, the Sokoto jihad came and put aright many things through the institutionalisation of Islamic law. Then came the Europeans, who colonised the area, imposed their crafty system of ‘indirect rule’ through which they milked the nation’s resources and pretended to be developing our people. But a word for colonialism: in spite of its self-serving ends, it put some sense into our people’s understanding of leadership and built a foundation for future progress, such as the railways, literacy and structures for democratic governance. Of course, the colonialists ultimately served themselves, at times employing brute force, while pretending to be serving the natives’ best interests. Hence the stiff resistance against it and the campaigns that uprooted it.

During the third epoch, the post-independence era, it was the natives that took over the mantle of leadership and used state resources in the service of the commonweal. In the north, proofs of their selfless service are legion even today. Even though they were called names by their opponents, we can see, in retrospect, that their dedication to serving the general populace was a thousand and one times better than that of our current leaders.

The fourth milestone is, indeed, today. This dates roughly from the end of the Nigerian civil war to the current reality. It is the worst span in the history of the region. After the violent eradication of those patriotic nation-builders and the 30-month civil war, came the various “corrective” military regimes that pretended, more than the colonialists, to be working in the interest of the nation. The truth is that, apart from the brief spasms of the Murtala and, later, the Buhari/Idiagbon regimes, they worked more for themselves. They institutionalised corruption, cronyism and nepotism. Most of them turned out to become among the richest and, by implication, the most influential people in the country. Because they benefited from a corrupt system, they sustained it and injected their bile into latter day rulers who came in civilian garbs. And because the civilians who inherited the mantle of leadership have been adequately coached in the dark arts of corruption, divisiveness and cronyism, they have carried on, marching within the system and resisting any move to change or overthrow it.

The cycle of violence the north is witnessing, including some of the worst yesterday, is a fall-out of the ruthless system foisted on the region by its selfish rulers of the military and post-military era. Many analysts have pointed at the crying poverty in the region as the primary reason for these volcanic eruptions that are causing the death of hundreds of innocent people, destroying edifices and disrupting the peace. Now what is the cause of the poverty itself? Is it not the tunnel vision – if there is vision at all – of the region’s leaders who have failed to unify the common people through their divisive politics and the misuse of the region’s resources?
The north is fast regressing in all indices of human development. Apart from poverty, illiteracy is growing; so also joblessness among the youth, with concomitant problems such as drug abuse and strange criminality (with many youngsters killing their own parents); collapse of morals and ethics, education, health care, etc. A combination of these problems has created a deep well of despondency among most youth in the region, who have lost confidence in the leadership. They are asking for a change – even away from democracy. Many are saying let’s go back to the sharia law which did well for the region under the Sokoto caliphate, not minding the cultural mix of the present times. Unsure of their success in such agitations in the face of resistance from the state’s coercive powers, many have resorted to hugely violent attacks.

What is the response of our so-called leaders to all this? They shirk their responsibility by simply passing the buck and engaging in histrionics. Appeals to conscience. Calls to prayers. Blandishments. Rhetoric. Trading blames. Peace conferences. Yesterday, all the chairman of the Northern Governors Forum, Governor Aliyu of Niger state, could do was an effeminate call on President Jonathan to “urgently convene a national security summit.” We have heard that before, and it won’t work. We are tired of talk shops. Northern leaders should develop the north. Rebuild the infrastructures bequethed to them by the post-independence leaders. Provide jobs. Educate the youth. Stop all the divisive politicking. And stop all the stealing. Try these, and see if the violence and the regression will not disappear fiam – one time!

My column in today's Blueprint
Posted by Bahaushe Mai Ban Haushi! at 23:26 No comments: 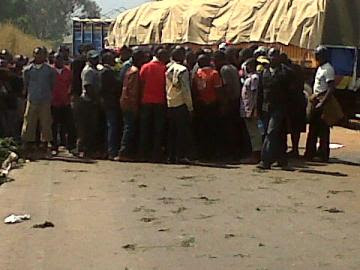 Published in my column in BLUEPRINT today.
Above photo: MEND members on Lokoja-Abuja road. Photo by Momoh Obansa
Posted by Bahaushe Mai Ban Haushi! at 23:52 No comments: