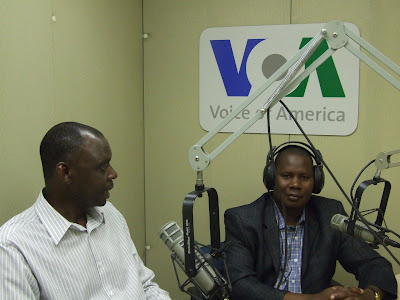 During my stay in Wasghington, DC, I was interviewed two days ago by Voice of Amrica's Howard Lesser for "Daybreak in Africa" programme. The interview was posted on the VOA's web site at

It goes as follows:

The heads of the World Bank and IMF have reassured finance officials from developing countries that they would not let the spiraling global financial crisis curtail efforts to foster economic gains for the world's most needy peoples. Addressing a Sunday Washington news conference after a meeting of the two institutions' Development Committee, World Bank head Robert Zoellick said that recently won pledges of aid for desperately needy populations would not be laid aside due to the sudden tightening of credit or a sustained global slowdown.

Zoellick's IMF counterpart, Dominique Strauss-Kahn, pointed out that crisis-plagued impoverished countries, through no fault of their own, were in danger of being penalized doubly by the crisis as they find it harder to get foreign funding, while their exports lose value as highly strapped world demand for their goods continues to plummet due to the global decline.

In light of the international uncertainty, how are African nations facing prospects of diminishing returns on foreign pledges of aid to reverse rising food and fuel costs and fulfill wide-ranging commitments reached at Gleneagles, Scotland three years ago to lift developing economies? Ibrahim Sheme is editor of the daily paper Leadership, published in Nigeria's capital, Abuja. In Washington to cover this month's preliminary and official World Bank and IMF meetings of top financial leaders, he says that African finance experts here take the institutional heads at their word and look optimistically toward continued progress, despite diminished expectations from the crisis.

"From the discussions that have taken place so far, there are clear indications that the World Bank and the IMF are not going to abandon poor nations. Already, there is a $1.2 billion facility which the Bank is putting together in order to assist developing countries as far as this economic problem is concerned," he said.

This year's annual October IMF-World Bank meeting in the US capital has been overshadowed by last Friday's G7 ministerial summit in Washington, which was attended by US President George W. Bush and by a major summit of European leaders on Sunday in Paris. Both meetings vowed to spend hundreds of billions of dollars to shore up their faltering banks and financial systems.

The 185-member IMF and the World Bank have been tasked with putting their stamp of approval on the country group and regional initiatives, while continuing to advocate the safety net to rescue impoverished countries threatened by rising food costs and escalating energy prices. Journalist Sheme says that despite their awareness that tumbling stock values, limited credit, and curtailed investment are likely to impair the recovery efforts of developing countries, African ministers at the Washington meeting remain optimistic that moves toward revitalization of their ailing economies will continue to have an impact.

"Even though the facilities may not be adequate, they will still continue to trickle in. So that's why I pointed out that African countries need to network among themselves. They must look inward and find ways to help themselves. They cannot afford to depend solely on donor nations," he said.

In addition, the Nigerian journalist says that Africa's more prosperous nations, like his own oil-producing giant, and mineral-rich, resource-endowed countries like South Africa and Ghana, have an additional obligation to extend their own foreign assistance across borders to less fortunate African neighbors. This, he says, is a matter of self interest, as well as an acceptance of regional responsibility.

Ibrahim Sheme says he has no reason to doubt the commitment of the World Bank and IMF to stand behind the mounting needs of the world's poorest countries. But he says the near future's prospects for a shattering of confidence in financial institutions leaves little doubt that "the facilities that are being proposed may not be adequate to care for our people in Africa."
Posted by Bahaushe Mai Ban Haushi! at 10:07 No comments:

We are happy to announce the shortlist of the 2nd edition (2008) of ANA ABUJA/ ENGINEER MOHAMMED BASHIR KARAYE PRIZE IN HAUSA LITERATURE. The shortlists are as follows in alphabetical orders (of the authors’ first names).

A total of 15 (fifteen) entries were received for this year’s competition. We note that entries have improved despite the short notice that the maiden edition (2008) will, like the maiden edition, centre only on prose writing in Hausa Language as against prose, poetry and drama in alternative order.

The entries is indeed very encouraging as it points to the wider acceptance ob both the Prize itself and the confidence in the final judgment of the literary judges, Mallam Kabir Dan Asabe of the FCT College of Education, Zuba, Abuja and Alhaji Ibrahim Dachia, General Manager, Yobe State Television, Damaturu, Yobe State.

It could be recalled that a year ago, the Secretary of the Federal Judicial service Commission, Abuja, Hajiya Bilkisu Abdulmalik Bashir, instituted what has now come to be known as The Karaye Prize (short for Engineer Mohammed Bashir Karaye Prize in Hausa Literature) in memory and in honour of her late husband, the late Engineer Mohammed Bashir Karaye of blessed memory, with the aim of encouraging creative writing in indigenous language. You may recall that winners were rewarded at a colorful ceremony at Abuja in October, 2007.

All arrangements for the award ceremony have been concluded by the Association of Nigerian Authors (ANA) Abuja Branch in collaboration with the Engineer Mohammed Bashir Karaye Foundation, promoters of the Karaye Prize.

The date for the Award ceremony is Thursday, 23rd October, 2008. The venue is Shehu Musa Yar’ardua Centre, Abuja and the kick off time is 3:30pm.

The Association of Nigerian Authors (ANA) on behalf of all its members hereby uses this medium to extend our heartfelt gratitude to the widow of the late Engineer Mohammed Bashir Karaye for this great boost to Nigerian literature. We also call on Federal and State governments and all Nigerians of goodwill to give literature and writers moral and financial support for National integration and development.

Thank you and God bless. 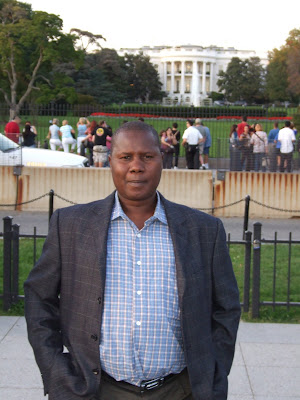