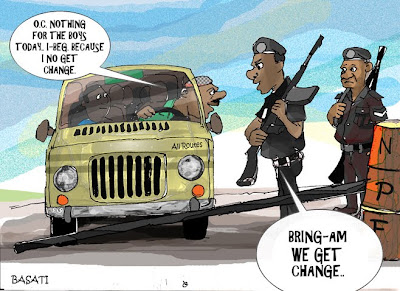 Almost on a daily basis, one reads at least one beautiful idea in the newspapers about what to do with with traditional Islamic school pupils known as almajirai. Many commentators, so much schooled in their biases and stereotypes, ignorantly blame the almajirai for a rash of crimes, including the murderous sectarian crises that have become the hallmark of life in the north. They argue that those ragged kids, who are usually armed with nothing but their begging bowls, are used by their teachers to kill and destroy.

Such ignorant postulations tend to ignore other professional beggers who have been visiting more pain and destruction than the almajirai – the gun-toting security men at the countless ‘check-points’ all over Nigeria. In the past, these fellows were stationed on the roads in order to fish out armed robbers, but with the worsening insecurity situation in the country, they were given the additional responsibility of finding potential bombers. Check-points on the approach to the nation’s capital have increased, so also the ferocity of the checks. And at night, in most cities, police men and sometimes soldiers are seen stopping drivers and asking them questions. “Wetin you carry” used to be the favourite joke of newspaper cartoonists; another was, “May I see your particulars.” These jokes portrayed our policemen not only as corrupt but also as foolish beggers for ‘something' to eat.

Today’s check-point beggers are not armed with bowls but with AK-47s. They tell you, in a mellifluous voice that belies their capacity for savagery: “Oga, your boys are here o! Na your work wey we dey do.” You have a choice to ‘dash’ them something or not. I have observed that most drivers do hand over some cash to these armed professional beggers, even if reluctantly. Which also persuaded me to think that they scarcely have a real choice, considering the fact that there have been incidents of ‘stray bullets’ hitting unsuspecting commuters in many parts of the country. I also observed that givers of such alms show more alacrity when they are stopped at night.

The question is: why should our security men be asking for money from drivers at check points? Even though some policemen think receiving from a willing giver is not really corruption, I think it is. They erroneously figure that corruption is when you steal from the public till; my more bookish friends have a word for this: extortion. Whatever you call it, it contributes to the myriad of actions that gave our police force a bad image not only in Nigeria but also internationally.

In 2006, the Centre for Law Enforcement Education (CLEEN), a non-governmental organisation, published the result of a survey which described the Nigeria police force as one of the country's most corrupt institutions in the country. That was a year after a former Inspector-General of Police, Tafa Balogun, was found guilty of corruption and sentenced to six months in prison. Only last year, the Human Rights Watch conclusively declared that widespread corruption in the Police Force was fueling abuses against ordinary citizens and severely undermining the rule of law in Nigeria. It wrote: “On a daily basis, countless ordinary Nigerians are accosted by armed police officers who demand bribes and commit human rights abuses against them as a means of extorting money. These abuses range from arbitrary arrest and unlawful detention to threats and acts of violence, including sexual assault, torture, and even extrajudicial killings. Police also routinely extort money from victims of crimes to initiate investigations and demand bribes from suspects to drop investigations.”

The international organisation’s damning 102-page report, titled “Everyone's in on the Game': Corruption and Human Rights Abuses by the Nigeria Police Force," documents the myriad forms of police corruption in Nigeria. It also shows how institutionalised extortion, a profound lack of political will to reform the force, and impunity combine to make police corruption a deeply embedded problem.

It is correct to say that not all policemen or ‘check-point soldiers’ are corrupt or begging commuters for ‘something to buy a loaf of bread.’ I know many who are pained to know that some people regard them “just like the others.” However, a Hausa proverb says that it is a single bad bean which spoils the soup. I also know that several reform programmes have been introduced in order to rid the police force of bad eggs. But it looks like none has succeeded yet. A level of success can be measured when ordinary policemen stop asking for pocket allowance from commuters or even reject it if offered.

This would, indeed, require a highly disciplined and motivated police force. To get such a force, money voted for security should be made to reach those for whom it was budgeted. A cop who knows that his Oga has commandeered his allowance and given him crumbs would not be willing to honour any espirit d’corps. A cop who knows that his take-home pay cannot take him even to the bus stop would find asking a driver for ‘something for the boys’ irresistible. It is the duty of the police high command to cater for the needs of their rank and file, with justice and fair play, before discipline can be imposed from the police station to the police check-point.

Published in my COLUMN in BLUEPRINT, on Monday. Cartoon courtesy of Human Rights Watch
Posted by Bahaushe Mai Ban Haushi! at 01:16 1 comment: 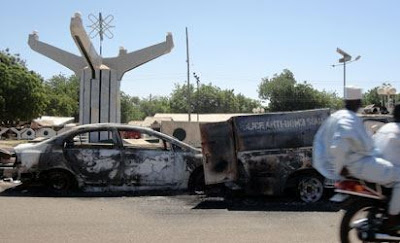 Yesterday was Sallah Day. Eid el-Kabir. The feast of sacrifice. It is the second largest Muslim festival, after Eid el-Fitr. This time, we commemorated the decision by Prophet Ibrahim (AS) to sacrifice his son Prophet Ismail (AS) in absolute obeisance to the Almighty Allah (SWT) who replaced the son with a ram.

Even though Sallah is a day feast, its festivities run for a minimum of three days. So, we are still celebrating – eating, drinking, exchanging visits and felicitations, and generally making merry. It is one of those rare moments when we forget our sorrows, failures and indiginities. Some of us even shelve their savagery and sink into mirth and laughter. It is momentary, but it reminds us of our sense of humanity, our capacity to love and be loved.

But should it be brief and guarded? Why should our sense of savagery, refusal to share love and our capacity for evil replace what we ought to be in the first place? Our humaneness ought not be momentary and guarded – it should be our essence!

These questions grew out of me on the eve of Eid el-Kabir. Bombs, deaths and wailings suddenly distorted the emerging convivial atmosphere. In Damaturu, Potiskum and Maiduguri, the now familiar occurence of bomb-blasts was witnessed. The death toll was horrifying. The official tally, issued by police, said 53 people were killed, comprising 36 civilians and 17 security agents (11 policemen, two soldiers, one Road Safety official, one fire service man, and two Civil Defence officials). Jama'atu Nasril Islam, the umbrella Muslim body, reported yesterday that 96 bodies were identified in the town. Add that to the ones recorded in the various skirmishes since 2009 when the Boko Haram War began and you will agree without hesitation that life has since become Hobbesian: "solitary, poor, nasty, brutish, and short".

Violence, division, hatred and revenge are defining our essence; these base feelings are an army arrayed against our humaneness. We are no longer brother’s keepers even within our religion, much less between us and members of other faiths. Trust has all but disappeared, replaced by deep-seated suspicion and vengeful anger. You can see it in the market-place, the media and internet social networks.

In the past in the North, Sallah Day used to be enjoyed not only by Muslims but also by their Christian neighbours, who eat from the assortment of food and the sacrificial ram meat. Now even Muslims celebrate it in fear and hesitation. A similar situation defines Christmas. Now the walls of fear have gone up in our hearts, erecting barriers that seem to be growing in height and in thickness. Yesterday, my friend Prince Charles Dickson posted a comment on Facebook, reflecting this rueful situation. He wrote: “Sallah has been peaceful in Jos but sadly no exchange of visits. Boundaries being maintained, for how long do we live like this?”

Yeah, for how long? Even Charles cannot answer the question. But it is a question that needs to be answered and a solution found to the pertinent issues. Unfortunately, one cannot see genuine efforts by the powers that be towards confronting the ogre of intolerance, distrust and violence. I had expected to see a serious commentary on the state of affairs from President Jonathan in his Eid el-Kabir message. But the man was lame. His blandishments, communicated to the nation via a written statement, were the usual appeals, as well as a call on Nigerians to support his Transformation Agenda. The strongest point in the President’s Sallah Message was: “As we labour to grow and develop our country, it is important that we eschew all vices, including religious and social violence that can disrupt the peace and stability of our nation.”

The nail was, however, best hit on the head of the matter by the Etsu Nupe, Alhaji Yahaya Abubakar who, in his Sallah Message after the Eid prayers in Bida yesterday, spoke about the need for justice for all categories of people in the country. “Our people always rejoice to see justice done without fear or favour, hence the manifest result of social justice is usually peace and harmony,” His Royal Highness said, adding, “All those given responsibility to lead should promote peace through justice and fairness irrespective of religious and ethnic differences.”

Justice for all, then, is the keyword for attaining peace and tranquillity in this country. And to achieve that, our leaders must rule with the fear of God just as the leaders past – those in the 60s and the early 70s – did. Today, our leaders are another kettle of fish altogether. Everyone is for himself. And you cannot attain justice by stealing. According to Transparency International last week, Nigeria’s civil servants took $3 billion bribe in 2010 alone. God knows how much they stole so far this year. That’s from bribes alone, not to talk of other corrupt practices such as direct stealing from the public coffers, using all sorts of excuses and tricks.

With this kind of tendency, we shouldn’t be surprised that, as reprehensible as it is, violence has become a part and parcel of our life. Also, no one should be surprised that Sallah Day, in spite of pretences to the contrary, is low key. Don't be surprised if Christmas is similar.

Published in my column on the back page of BLUEPRINT yesterday
Photo above shows a scene of devastation in the Damaturu attacks
Posted by Bahaushe Mai Ban Haushi! at 13:59 1 comment: