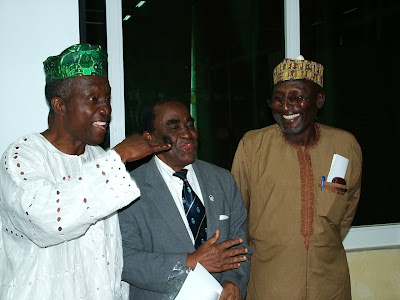 Jude Dibia and Kaine Agary, authors of the novels 'Unbridled' and 'Yellow-Yellow' respectively, have emerged on the shortlist of the 2008 Nigeria Prize for Literature. The contest is organised by the Nigeria Liquefied Natural Gas Limited (NLNG).

The announcement was made this Thursday at a "world" press conference in Lagos.

Chairman of the Literature Committee, Professor Theo Vincent, said the two writers emerged after a rigorous and meticulous scrutiny by the panel of judges.

149 books vied for the prize, out of which 30 were disqualified and finally 11 were shortlisted, said Prof. Vincent. Dibia and Agary shot out of the 11.

The grand finale will take place on October 11, 2008 when the overall winner will be announced.

* 'Dream Deferred' by Ozioma Izuora
* 'Forever Chimes' by Mark Nwagwu
* 'Outrage' by Promise Ogochukwu
* 'The Conquest' by Chinedu Eze
* 'Treasure in the Wind' by Odili Ujubuonu
* 'Unbridled' by Jude Dibia
* 'Under the Brown Rusted Roofs' by Abimbola Aunni Adelakun
* 'Waiting for Maria' by Ifeoma Chinwuba
* 'When the Wind Blows' by Camilus Chima Ukah
* 'Wuraola Forever' by Femi Osofisan as Okinba Launko
* 'Yellow-Yellow' by Kaine Agary.

Here's doffing my hat to Dibia and Agary. We go wash-am with one of them next month!

The photo above, taken by LEADERSHIP's Benedict Uwalaka during the press conference, shows (from left) the Dean of Faculty of Social Science and Management, Bowen University, Iwo, Osun State, Prof Dan Izevbaye, cracking a joke with Prof. Charles Nnolim of the Faculty of English Studies, University of Port Harcourt, and Prof. Tanimu Abubakar of Department of English, Ahmadu Bello University, Zaria, during the press conference to announce the finalists for the 2008 Nigeria Prize for Literature, in Lagos.
Posted by Bahaushe Mai Ban Haushi! at 15:45