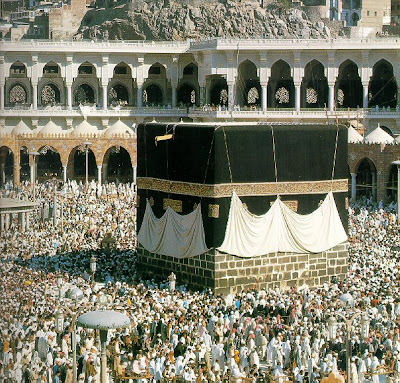 I am writing this piece from a house in Shahar 16 quarters of Mecca City, a walking distance from the Harami (Kaaba), Islam's holiest site. I am one of the millions of Muslim pilgrims taking part in one of the most personal journeys of all time -- the Hajj. So permit me if I sound personal, or even cocky, in this write-up. It's my personal one-off impression of life as I see it in the holy city, which I am visiting - together with my mother and wife - for the first time. Nothing original, of course, as many of you had seen it all before, in many cases several times over, across the years. But a writer always has an eye for unique things while in a strange place. And Mecca, the cradle of Islam, is unique in many tantalising, even if provocative, ways. For the first-time vcisitor, the attractions are doubly provocative.

Because of the unique things that abound, there is, ab initio, the problem of what to describe first. Is it the quietude which ushers in the break of day, punctuated by the occasional honking of vehicles, or the moving stream of human traffic? Or is it the multiparity of languages representing diverse cultures? Or is it the beauty of Arabic being spoken by almost everyone? Chances are you would find yourself rambling on and on, oscillating between a topic and another, and back again, until you are almost lost in the beehive of your emotions. I am a victim of that dilemma as I sit, here, by the window of my sixth floor room, watching the streets below coming back to life early on Wednesday morning. People -- the first spectacle of any adventurous writer -- have begun to walk by, clad in Islamic dress, with a majesty akin to that of the rulers of the land, whom I have not yet met (and can't possibly hope to).

Mecca is a city that bubbles and rumbles with life. A lugubrious quietude belies its surging energy. At night it is a city of lights; bright neons done in wonderful calligraphy; street lights that never go off; well-lit houses with their tiny, zig-zagging streets, and bazaars decked with expensive clothes and other (expensive) ornaments. In the daytime it throbs brilliantly with people and vehicles. And you can't help but marvel at the topography, which I see as "central" Middle Eastern even if it's needless for me to say so in the spirit of "Don't tell us there is water in the Atlantic Ocean." The buildings out there are stylish. Mosques dot the atmosphere, and readings from the holy Qur'an blare out at prayer times.

And talking about cosmopolitanism, the great influx of foreigners for the Hajj has made the city a place of diversity. It has always been that way because pilgrimage here is not necessarily an annual ritual but a round-the-year exercise: apart from Hajj, there is the Umra, or lesser pilgrimage, which one can embark on at any time of the year. Apart from the pilgrims, many nationals have made Mecca their home. Especially West Africans. Now, talking about West Africans is more or less talking about Nigerians. In Mecca, any black person is regarded as a Nigerian even if he/she has never been there. It's like the Northerner in the South, whom people see as a "Hausa" Muslim person. That is because of the role of Nigerians living here play -- good or bad. I have heard incredible tales about the mostly negative exploits my compatriots are credited with doing here -- stealing, touting, prostitution, drugs and other forms of vice. I am still searching for someone to tell me the good things that they do. On my part I know two, at least. First, there are many Islamic scholars teaching in big schools and professionals such as doctors, English teachers and oil engineers contributing to the Saudi economy and society. No one talks about these, of course. Second, Diaspora Nigerians in Mecca have created a "Little Nigeria" here, or a "Little Kano." Once you are in the "Little Kano" areas of the city (and I hear that the Saudis have ensured that your level of education determines whether you live in these parts or not), you are home. Hausa is widely spoken. Even some Arabs speak it. And you can eat "Hausa" food, including very pristine ones like tuwo, danwake, kunu, the ubiquitous shinkafa da kaza, and even fura da nono. All these are sold right at the door of our house. Indeed, some of these delicacies are harder to find in parts of northern Nigerian cities than in Mecca. Home sickness? It's non-existent, sir. The "Little Kano" residents, majority of whom live in Mecca illegally, playing a Tom & Jerry game with policemen and immigration officers, have nonetheless made the Arab citizens in these parts look like illegal aliens.

Am I comfortable in Meca? This question reminds me about the Hausa truism which says that once you have left home on a journey, it is the journey that "owns" you, and not the other way round. Which means that the nature of the journey determines your comfort or otherwise. The journey for Hajj is not designed to be a cozy one. About three million people converge in Saudi Arabia during Hajj. And they come from different nations of the world, forming the biggest melting pot of cultures on earth. It is obvious that the Saudi authorities have put in place stringent measures to deal with the situation, providing comfort and security. Their efforts are complemented by those of the authorities of various nations and states. Even so, it's impossible to create an atmosphere that could give each pilgrim 100% comfort.

I did not expect to find comfort even though I have heard on the radio about the wonderful preparations made by the various pilgrim boards to make everybody happy. Personal contacts with other been-tos and the reading of Hajj literatures prior to my departure, especially the book, "Getting the Best Out of Al-Hajj" by Abu Muneer Ismail Davids, have warned me never to expect too much. So my renown optimism has been tempered by a huge dose of expectant realism. So I am happy. I am not one of those Nigerians that moan about lack of this or that. Not yet, though. Thank God.

What of worship? That is why we are here. We, the tourists of God, are here to complete one of the five pillars of Islam, the Hajj. Hajj is a journey of renewal of faith, couched in the absolute belief in the oneness of God and obeisance to Him. It is also one of the greatest opportunities of all time, the chance to visit the holy sites, perform both the compulsory and the recommended rituals therein. Ultimately, one hopes to gain Allah's forgiveness and mercies. This hope is not vain, especially when you are performing the Hajj. Those who have accomplished Hajj should be grateful for the opportunity, and those who are here are excited, while those who have never been here should pray to be here. Hence our spending time in piety, going to the Kaaba every day to perform the Tawaaf (circumambulation of the Kaaba) and the five daily prayers.

I could write about this enchanting journey endlessly. The big comfort here is that this is a great lesson in piety, in the belief in the oneness and mortality of mankind, in the hope that life will change for the better, not only for oneself but also for all men and women seeking to do good in life, with the overall prayer that salvation will come through good deeds like this journey to Islam's very origin. If you can come next year, please do so.


THIS IS MY COLUMN IN LEADERSHIP NEWSPAPER OF TOMORROW THURSDAY
Posted by Bahaushe Mai Ban Haushi! at 11:50