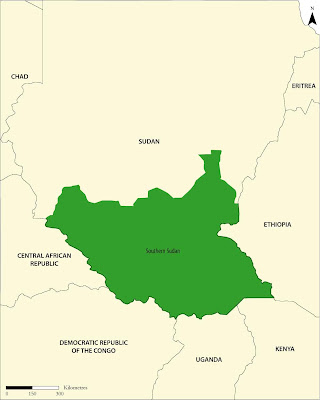 "After the darkness of war, the light of a new dawn is possible." – President Barack Obama on South Sudan independence on Saturday

At last, the long-awaited independence of South Sudan has come. Last Saturday, the region became the world's 196th nation, extricating itself from the control of Sudan in the north. Independence came at a price. Over five decades of two civil wars (1983-2005) had caused the killing of at least two million South Sudanese, who have also suffered ruin occasioned by discrimination, deep-seated distrust and other troubles.

Africa's longest-running conflict is indeed over, but what does independence really mean to South Sudan? The immeasurable joy and high expectations which manifested from far-flung villages all the way to the John Garang mausoleum in the capital Juba were understandable. Most analysts hope that the new continental baby will eventually meet the expectations of the traumatised nation.

U.S. President Barack Obama captured this sentiment poignantly when he told the South Sudanese: "A proud flag flies over Juba and the map of the world has been redrawn. These symbols speak to the blood that has been spilled, the tears that have been shed, the ballots that have been cast, and the hopes that have been realised by so many millions of people." Susan Rice, the U.S. ambassador to the U.N. and American envoy at Saturday's celebration, hit the nail on the head when she urged the people to begin to think towards building a country worthy of the sacrifice of all the lives lost during the five decades of conflict. "Independence was not a gift you were given. Independence is a prize you have won," she said. "Yet even on this day of jubilee we remain mindful of the challenges that await us. No true friend would offer false comfort. The path ahead will be steep... but the Republic of South Sudan is being born amid great hopes."

Indeed, the path to South Sudan’s future is strewn with thorns. The new baby has to learn to walk. In doing this, it has to grapple with internal problems like provision of critical infrastructure and regional issues relating to its unresolved conflict over the border region of Abyei — where northern and southern troops are sparring for a fight.

South Sudan being oil-rich, there are hopes and fears about what petro-dollar could bring. On one hand is the good life wealth can bring, and on the other is the social dislocation such money usually brings to oil-rich African countries. We all lament the corruption and injustices, aside the environmental pollution, which oil wealth has brought to many African nations. It is oil wealthwhich has made Nigeria one of the most corrupt and one of the poorest countries in the world.

South Sudan should try and manage its wealth very well. Its more than 8 million citizens must enjoy basic needs such as education, health services, water and electricity. It should also manage the challenges of democratic governance and insist on observing the rule of law. Conceiving a workable power-sharing system for its dozens of ethnic and military factions would go a long way in ensuring political stability, which is sorely needed for economic prosperity. Of equal importance, it must begin to diversify its oil-based economy.

The young government also faces the challenge of relating with its former overlord, Sudan. It should quickly resolve all border claims between them. Sudan may not be a great team player in that regard, more so when more than 75 percent of what was its daily oil production now belongs to the South. The two countries can ill afford to continue with their age-long enmity. As U.N. secretary-general Ban Ki-Moon said just before flying to Juba for the celebrations, "I know secession is painful, emotionally and financially... While the people of north and south Sudan will soon live in different countries, their future will be closely linked."

Published in my column in BLUEPRINT weekly newspaper, this week
Posted by Bahaushe Mai Ban Haushi! at 11:58