Do we really have a government? 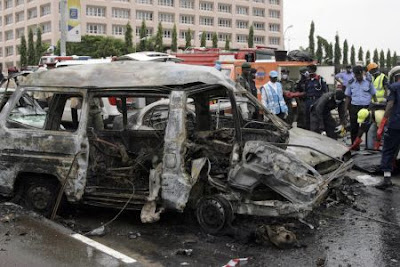 Yes, we do have a government. But which type may be a more appropriate question. Nevertheless, the first question is germane to the debate over the worsening security situation in the country, especially after Friday’s massacre, through coordinated bombing of Kano in five places and the simultaneous shooting of uncountable people –leading to the death of hundreds of people. It has since been accepted by all and sundry that the weekend war on Kano was the worst attack ever carried out by Boko Haram, both in terms of destruction and casualty figure.

The way the attackers succeeded in carrying out the deed and the crass failure by all security agencies under any name to pre-empt or stop it have spawned the question nationwide and in social media whether we really have a government in this country. Many Nigerians have asked the question knowing that a government is supposed to secure the life and property of all citizens. But for years now our government has failed to provide the basic security needed for any Nigerian to exist in his motherland. Violent crimes such as armed robbery and assassination (which still occur unabated) have since been overtaken by Boko Haram’s insurgency.

The attack on Kano was the clearest proof that our government, together with its money-guzzling security outfits, is at its wit’s end about the Islamic sect. That any armed group could visit such a horrific and devastating blow on innocent and unsuspecting residents of the north’s most populous city was hitherto unthinkable.

Nigerians are thoroughly disappointed in this government for its ineffectual handling of many things, especially three issues – free and fair elections, the economy and security. Though all three have a potential for causing violent death, security, which takes the lion’s share of the national budget, is nowhere to be found.

The existence of structures like police and military formations no longer provides any comfort to the taxpayers who sponsor them. They do not give value for money. They are becoming a drainpipe on our scarce resources.
The man we identify as the President of Nigeria, Dr Goodluck Ebele Jonathan, appears helpless and clueless in the prevailing circumstance. He tends to believe that he is operating alone, probablywith a few trusted aides. This is evident in his recent resignation to fate, moaning that there are Boko Haram members in his government. Even though he has not named names, it is easy to guess the type of person the President meant: a Hausa/Fulani, Muslim, from the north. And we all know who is a Hausa/Fulani, Muslim, northerner in the administration, starting from the VP downwards.

Now, a government which has “terrorists” in its hierarchy is no government. It is a cult or a nest of vipers who are prepared to bomb and destroy its citizens in order to achieve some morbid agenda. Since the President believes that there are Boko Haram members in his government, then, does he really have a government? Shouldn’t we assume, by his own confession, that certain of his top lietenants are not only undermining the administration but are also causing the death of thousands, thus commiting treason and a sundry crimes? Shouldn’t we also believe that the President knows these people and is afraid to name them, much less have them arrested and prosecuted? And if he really knows the members of Boko Haram in his government, is he not an accessory to their deeds?

Many today believe that some of these killings ascribed to the original BH are being commited by another shadowy group with aims and objectives far removed from instituting Sharia law all over Nigeria. The agenda of the second– and probably more ruthless – BHis believed to be the destruction of Nigeria as a single entity, in line with a U.S. agency’s prophesy that Nigeria may cease to exist by 2015. This theory is being widely shared today, more so with the increasing sophistication of the bombings and the growing desperation of the attackers. The almighty God, who is All-knowing, is seeing all.

In the meanwhile, Jonathan needs to prove the conspiracy theorists wrong in order to salvage what remains of the credibility of his government. He has been destroying it bit by bit through a series of avoidable missteps. His promised “fresh air” has since become foul and suffocating. His blunders are legion, from violently wrestling a presidency which his party had zoned to the north through anon-election, to the mishandling of the current insurgency, the removal of fuel subsidy and its attendant somersault and being impolitic with his utterences.

One big misstep is his failure to fulfill his promise of restructuring the security agencies soon, beginning with changing their chiefs. We are witnessing the worst security situation in the history of the country under the very noses of these security (?) chiefs. While each one of them holds fast to his office, the killings have continued. Because the word ‘honourable resignation’ is absent in the lexicon of Nigerian political appointees whose offices have been tainted by one scandal or the other, Jonathan should have had the courage to wield the big stick against the failed agencies as a way of injecting public confidence into them.

His biggest challenge today is getting round to sorting out the Boko Haram conundrum. As I had cause to argue in this column a few months ago, the solution to Boko Haram, in the face of failure of intelligence, is not police action or military onslaught but political brinkmanship. The Boko Haram leadership may seem to be invisible, but it is now known to be headed by Imam Shekau. The leadership once named certain Muslim clerics that it agreed could help broker a parley with them. So, who has ever reached out to those malams as a first step towards starting a dialogue?

Jonathan, who is trying to act macho, is losing grips on all fronts by not toeing this line. I understand that the security chiefs, who feed fat on the ugly situation, want the administration to continue toeing the tough-guy line even though the price is the bloody encounters we are witnessing all over the north. If the agenda is not really to balkanize Nigeria as the ‘fake Boko Haram’ is seen to want, the President should stop listening to any aide asking him not to dialogue with Boko Haram. The Kano killings of three days ago have proved that Jonathan is clearly at his weakest point now.

If you are down, dialogue is the best option. This is not the time for playing Jason Statham or Arnold Schwarzenegger, please. Leave the action heroes to the movies; we are in the real world.

Published in my column in Blueprint today
Posted by Bahaushe Mai Ban Haushi! at 07:43