Al-Mustapha: Ending It All 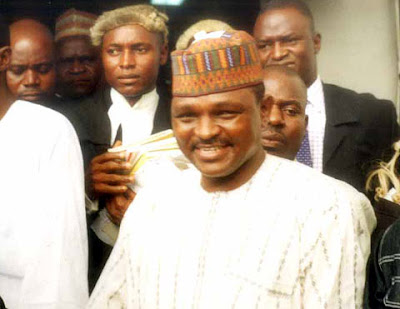 The story of the detention in prison of Major Hamza Al-Mustapha and others is one of the most intriguing political sagas in modern-day Nigeria. Al-Mustapha, the Chief Security Officer to former Head of State, Gen. Sani Abacha; former Lagos State Commissioner of Police, Mr. James Danbaba; former head of the Police Unit in the Presidential Villa during the Abacha regime, Chief Superintendent of Police Mohammed Rabo Lawal, and former Military Administrator of Zamfara State, Col. Jibrin Bala Yakubu, have been stewing in Kirikiri prison in Lagos for 12 years over their alleged role in the murder of Kudirat Abiola and the attempted murder of the publisher of The Guardian, Mr. Alex Ibru, and the former Delta State Director of Sports, Mr. Isaac Porbeni. Their cases have been ensconced within Lagos courts, stuttering to nowhere.

While the accused men languish in jail, their beloved ones wait anxiously for the day that they might hug them. To many, that day will never come. Al-Mustapha’s father died three years ago and Danbaba’s daughter Josephine – who used to take diabetic drugs to him in prison – died last year. Last week, Al-Mustapha’s aged mother returned from Saudi Arabia, where she was diagnosed with a heart ailment. At an annual prayer session on her return to commemorate the death of Al-Mustapha’s father, the detained major’s brother Hadi expressed trepidation about the old lady dying without seeing her favourite son again.

Meanwhile, blames are being traded over who is responsible for this messy situation. We have heard tales from various quarters. Al-Mustapha himself blamed former Head of State, Gen. Abdulsalami Abubakar, for his ordeal. Only two days ago, on the VOA Hausa service, Alhaji Mustapha Jokolo, the deposed Emir of Gwandu, accused the National Security Adviser, Gen. Aliyu Mohammed Gusau (rtd), of being responsible for Al-Mustapha’s continued detention, alleging that he it was that advised the then President Obasanjo against releasing him, citing security concerns. Now, Jokolo’s may have been a case of sour grapes following his removal as emir, but his story has, nonetheless, highlighted the political dimension of the case, which is the attempt by some top Northerners, including the Emir of Kano, to secure the release of the detained men.

The question whether Al-Mustapaha and co are guilty is obviously quite immaterial to most Nigerians. What most people believe is that politics, rather than judicial considerations, informs the detention. And the moral burden falls on all Nigerians of conscience to canvass for the release of the former security men.

My concern is both with the moral and the judicial sides of this case. The continued incarceration of these unfortunate men no longer makes moral, strategic and, above all, judicial sense. Twelve years is too long for detention without conviction. If guilt has not been established against them all this while, then there is simply no basis for their continued detention.

The question is how to get them off the hook.

Clearly, we cannot divorce politics from this pitiful saga. The accused persons have argued, ever since we began to get their side of the story during the Oputa panel hearings, that they were being persecuted because of their work as security men during the Abacha regime. They said certain highly connected Nigerians of, ironically, northern origin had decided to “teach them a lesson” because of some misdemeanours, such as denying them easy access to the head of state or some forms of disrespect. The big men were said to have sworn to extract their pound of flesh from the security goons and were glad to have found an opportunity in the Ibru case. The detainees also argued that the lurid tales we heard from prosecution witnesses were all cooked up in order to nail them.

Another story was that Obasanjo sat on the case because he was jailed by Abacha and that Yar’Adua was disinterested in it because of his brother Shehu’s death in prison during the Abacha era. Now, what stops President Jonathan from doing something about the case? The long tale of Al-Mustapha and co’s incarceration should be ended by the authorities.

The political dimension of this saga presupposes that many people, especially in the North, view the matter as one in which the region as an entity has failed. There is a widespread belief that northern laxity and hypocrisy are fertilising the issue. The North must recognise the fact that if Al-Mustapha and co were Southerners, the region’s elites would have used their political clout to ensure that their brethren were removed from the clutches of detention.

They did it many times. Ralph Uwazuruike, leader of the Movement for the Actualisation of the Sovereign State of Biafra (MASSOB), a secessionist organisation listed by the Federal Government as a terrorist organisation, did not recognise the Nigerian state. He fought it with arms. But he was released after a heated campaign by his Igbo and other fellow Southerners led to the quick dispensation of the case in court. Ganiyu Adams, factional leader of the Oodua Peoples Congress (OPC), a militant Yoruba nationalist organisation, launched a violent campaign against “Hausa-Fulani” in the South-west, leading to the massacre of scores of “Hausa-looking” Northerners. But he was released from detention after his court case was exhausted. Today, he is one of the “respected statesmen” of that region. So revered he is that the governor of Kano State, more of whose citizens were killed in the OPC’s bloody campaign, invited him to Kano recently to commission some projects.

However, while the political dimension is explored, more should be done on the judicial front. The judicial gladiators in the saga should be made to speedily conclude the trial. Lawyers who obtain injunctions on preliminary objections while failing to battle the substantive suit (thereby hanging the case in months-long adjournments) are not doing justice to the detainees that hired them. For it is plausible that the delay in dispensing justice in this case has created a vicious circle in which only the detainees and their families pay dearly for it.

Isn’t there a chance of plea bargaining in the case as a way of ending it all? Northern leaders in particular must come out of their cocoon and campaign for the release of these men, using political and judicial instruments. Trading blames is tantamount to playing with the lives of these unfortunate men.

Al-Mustapha and co should not suffer the fate of the suspects in the murder of Pa Alfred Rewane. Five out of the eight persons who stood trial for their alleged role in the 1995 murder of the NADECO chieftain have died in prison custody under mysterious circumstances. On Wednesday this week, a Lagos High Court acquitted one of the surviving accused persons after he had spent 15 years in Kirikiri.

Both the Jonathan administration and the Lagos State government can enter a no-submission plea in the Al-Mustapha and co’s cases. Most of these men are ill, suffering from one ailment or the other. If they die in prison, the ghosts of the incarcerated would not let many of our leaders sleep in peace. Amen.
Posted by Bahaushe Mai Ban Haushi! at 02:33