In The Name Of Religious Freedom 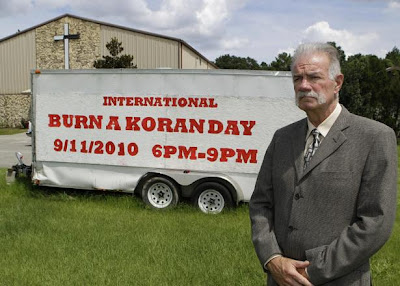 Until the cancellation of the event two days ago, the first known formal burning of the holy Qur'an would have taken place today. The world had been in tenterhooks ever since the event was first announced on Facebook recently with a page entitled "International Burn A Qur'an Day." The event, organised by a"small" church known as the Dove World Outreach Centre, based in Gainesville,Florida, was led by a 58-year-old minister, Rev. Terry Jones, to mark the ninth anniversary of the September 11, 2001, attacks. The cancellation came both as a relief and a disappointment to many Muslims; relief because a potential disaster of unknown magnitude had been averted, and disappointment in the sense that Jones' threat had turned out to be hollow, a stunt-maker's publicity-seeking gimmick. For many Muslims, however, the cancellation was an affirmation of Allah's promise in the same holy scripture that He will always protect His Book.

It was not only Muslims that heaved a sigh of relief. Jones had generated a swathe of condemnation from Muslims, Christians and Jews from across the globe. No Christian in his right senses will support a project of such dubious intent. Even though Christians and Muslims differ on many key articles of faith, most hold each other with respect, especially in a world which has since shrunk into a global village, and nations are multi-religious. Jones had got his 15 minutes of fame, yes, but from the Vatican to the White House and actress Angelina Jolie, and from Montreal to Nigeria, the outcry is the same: don't do it, Terry.

There were demonstrations in Afghanistan, Pakistan and Indonesia. The Vatican said they "cannot be counteracted by an outrageous and grave gesture against a book considered sacred by a religious community." Archbishop Lawrence John Saldanha of Lahore, Pakistan, described Jones' plan as "contrary to the respect owed all religions and against our doctrine and faith." Lebanon's Christian president, Michel Suleiman, said the book-burning threat was "in clear contradiction to the teachings of the Abrahamic religions and of dialogue among the three faiths".

In Washington, leaders of a range of faiths came together at the National Press Club calling for a united religious front against "fear and intolerance" aimed at Islam. The former archbishop of Washington, Cardinal Theodore McCarrick,called the anti-Muslim furore a "powerful moment that calls for a powerful response." At least 24 inter-faith leaders near Jones' church planned activities to adamantly reject the burning. Larry Reimer, a pastor at the United Church of Gainesville, said Jones "represents virtually no one... It's disrespectful and has nothing to do with God who tells us to love one another."

The U.S. government feared for its citizens around the world. President Barack Obama described Jones' crazy plan as a "recruitment bonanza" for al-Qaeda. His top aides echoed this observation. U.S. commander in Afghanistan, Gen. David Patreaus called it "precisely the kind of action the Taliban uses and could cause significant problems - not just here, but everywhere in the world we are engaged with the Islamic community." His counterpart in Iraq, Gen. Ray Odierno,warned that if the burning went ahead, there would be some backlash. "I worry that it will turn into violence against our troops." And Secretary of State Hillary Clinton denounced the plan as "disgraceful".

From the foregoing, one can deduce that Jones' project was not supported by other Christians, so it was not a general anti-Islam push. It was an isolated case of a few bigots - Jones' congregation consists of only 50 parishioners. Secondly, Jones had capitalised on the western media's penchant for gobbling up any trash thrown at them as newsworthy. The world would have been a more secure place had this madness not been overblown. Thirdly, western political leaders are against the proposal not only because it was against their own religious values but also because it could put their citizens in harm's way abroad. Fourthly, the fabled "clash of civilisations" is not about to be averted.

Indeed, Jones' plan represented a fresh big thrust in evangelical fundamentalism whereby some believers on each side of the divide campaign for the obliteration of the other. This means that the task of interfaith dialogue and harmony is becoming more difficult.

It is only in the west, and specifically in America - the land of possibilities,where everything is possible - that such a spectacle could be meticulously organised by a supposedly establishment figure. The question is why the U.S. authorities didn't go beyond reasoning with Jones and try to stop the insane event. Well, the answer I expect to get is that the Gainsville church has the constitutional right to exercise its religious freedom. In cancelling his madness, Jones drew a connection between what he was trying to do and the attempt by some Muslims to build a mosque on the spot where the 9/11 tragedy occurred. This blackmail is fatuous, because building a mosque there does not constitute a sacrilege against Christianity. Personally, I don't support the idea of building that mosque; reason: it hurts nationalists who erroneously consider Ground Zero a symbol of Americanism. As Obama said, building the mosque is legal but not necessarily right - the same thing White House advisor David Axelrod said when he stated that Jones "may have a right to do it. The question is whether it's right."

The Jones saga may appear to be over, but we shouldn't be complacent. There are many other Joneses out there, even in Nigeria. Western governments should revisit their concept of religious freedom. A government is responsible for securing people's lives. If what Jones tried to do threatened American security as all those commentators argued, didn't that show that he was breaking American law in a way? Are many Muslims not being detained at Guantanamo Bay because they are suspected of threatening America's interests?

Obama's good intentions in bridging the gap between the west and Islam are threatened by bigots like Jones. Allowing such fellows to practise their hate is against the grain of Obama's Al-Azhar Declaration. Religious freedom, like all freedoms, has a limit; it should be freedom to practice your religion, and not to stop others from practising theirs. Burning the Qur'an - an expression of extreme hatred - constitutes an act of stopping Muslims from practising their religion through desecration, intimidation and denigration. A hand ful of extremists have no right to do something that might unleash a possible backlash that could consume innocent lives.

We should appreciate that this issue could have snow balled in lands that had nothing to do with the Gainsville madness. Already, the provocative statements spewed by Jones have hurt many Muslims deeply, more so as they were circulated during Ramadan, Islam's holiest month. Jones, who represents neither America nor mainstream Christianity, did not care if anyone died as a result of his ill-informed action. He acknowledged it would be "tragical" if so much as one person died as a result of this, "but at the same time, we do not feel responsible for that," he told ABC. Please, America, don't allow folks like him to do what they like in the name of religious freedom.