The Canonisation Of MEND 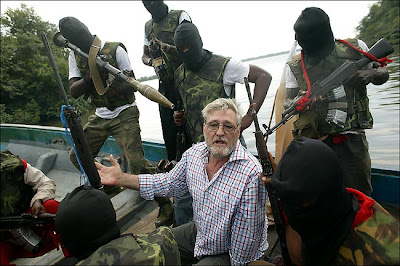 MEND is not a terrorist organisation- President Jonathan

For a week now, the refrain in Nigeria has been about who to blame for the October 1 bombings in Abuja in which 16 persons were killed. Days before the criminal act, the Movement for the Emancipation of Niger Delta (MEND) had issued a warning that it was going to detonate explosive devices during the ceremony marking the 50th independence anniversary. Apparently, the warnings were ignored by the government because there was a lot at stake: it would be a gargantuan embarrassment after so much work - and money - had been put into the preparations and foreign dignitaries were already in town for the ceremony. MEND, in its characteristic braggadocio, said effusively after the dastardly act that the government should be blamed for the loss of lives because it did not heed the well publicised warnings.

This admission of guilt by MEND was responsible for the universal shock at Jonathan's hasty exoneration of the militant group. The President's rush to judgement was ill-advised as it was fatuous. His further claim that MEND was not a terrorist organisation was a poor, outrageous attempt to rewrite Nigerian history, given the activities of the group in the last five years. He made a poor portrayal of himself as president giving the impression that he must defend MEND because he is representing the South-South only.

The timeline below, obtained from Wikipedia, shows some of the activities of MEND since 2006. It should remind us that it is absolutely wrong to place MEND on the same footing as the African National Congress as Jonathan tried to do.

•Nine officials of the Italian petrol company Eni SpA are killed in Port Harcourt. MEND militants briefly occupied and robbed a bank near the Eni SpA base, leaving at about 3:30 p.m, about an hour after they showed up.

•May 10, an executive with the United States-based oil company Baker Hughes is shot and killed in Port Harcourt by MEND.

•June 2, a Norwegian rig offshore Nigeria was attacked and 16 crew members were kidnapped.

•Aug. 20, 10 MEND members are killed by the military. The members were working on releasing a Royal Dutch Shell hostage. In an email to Reuters, MEND states, "Our response to Sunday's killings will come at our time, but for certain it will not go unpunished."

•Oct. 2, 10 soldiers are killed off the shore of the Niger Delta in their patrol boat by a MEND mortar shell. Earlier that day a Nigerian/Royal Dutch Shell convoy was attacked in the Port Harcourt region resulting in some people being wounded.

•Oct. 3, MEND abducts four Scots, a Malaysian, an Indonesian and a Romanian from a bar in Akwa Ibom State.

•Oct. 4, 9 soldiers are killed when they attack a MEND camp.

•Nov. 22, a soldier is killed when soldiers attempt a rescue of kidnapped oil workers.

•May 1, at 4:15 a.m., MEND attacks Chevron's Oloibiri floating production, storage, and offloading vessel off the coast of Bayelsa State. After one hour of fighting with security boats, resulting in the death of 10 people, MEND seizes six expatriate workers, consisting of four Italians, an American and a Croat. On the same day, MEND publishes photos of the captives seated on white plastic chairs in a wooden shelter around the remains of a campfire.

•May 3, MEND seizes eight foreign hostages from another offshore vessel. It releases them less than 24 hours later, stating they had intended to destroy the vessel and did not want more hostages.

•May 8, three major oil pipelines (one in Brass and two in the Akasa area) are attacked, shutting down oil production and cutting power to a facility run by Italian oil company Agip, part of the ENI energy group. An e-mail statement from a MEND spokesperson says, "Fighters of the Movement for the Emancipation of the Niger Delta (MEND) attacked and destroyed three major pipelines in Bayelsa State... We will continue indefinitely with attacks on all pipelines, platforms and support vessels."

•Sept. 23, MEND spokesperson Jomo Gbomo announces, through a communiqué to the Philadelphia Independent Media Center, that media reports of his arrest and detention were false; and then further informs that MEND has officially declared war, effective 12 midnight, September 23, and that they would be commencing "attacks on installations and abduction of expatriates."

•May 3, MEND militants attack Shell-operated pipelines, forcing the company to halt 170,000 barrels a day of exports of Bonny Light crude.

•Sept. 14, MEND inaugurates "Operation Hurricane Barbarossa" with an ongoing string of militant attacks to bring down the oil industry in Rivers State.

•In Sept., MEND releases a statement proclaiming that its militants have launched an "oil war" throughout the Niger delta against both pipelines and oil production facilities, and the soldiers that protect them. In the statement MEND claims to have killed 22 soldiers in one attack against a Chevron-owned oil platform. The government confirms that its troops were attacked in numerous locations, but says that all assaults were repelled with the infliction of heavy casualties on the militants.

•Sept. 27, a week after declaring war and destroying several significant oil production and transportation hubs in the delta, MEND declares a ceasefire until "further notice" upon the intervention of Ijaw and other elders in the region.

•Equatorial Guinea blames MEND for an attack on the presidential palace in Malabo on February 17, which resulted in the death of at least one attacker.

•May 15, a military operation undertaken by JTF begins against MEND. It comes in response to the kidnapping of soldiers and foreign sailors in the region. Thousands of Nigerians flee their villages and hundreds of people may be dead because of the offensive.

•June 18-21, MEND attacks pipelines on three oil installations belonging to Royal Dutch Shell. In a campaign labelled by the group as "Hurricane Piper Alpha", it also warns Chevron that it would "pay a price" for allowing the Nigerian military use of an oil company airstrip.

•June 18, MEND blows up a Shell pipeline as a warning to Russian president Dmitry Medvedev, who is arriving Nigeria the next day, and to any potential foreign investors.

•July 6, MEND claims responsibility for an attack on the Okan oil manifold. The pipeline was blown up at 8:45 p.m. The militants claim that the manifold carries some 80 percent of Chevron Nigeria Limited's off-shore crude oil to a loading platform.

•In a separate action on the same day, the group says that three Russians, two Filipinos and an Indian were seized from the Siehem Peace oil tanker about 20 miles from the port city of Escravos.

•July 11, MEND carries out its first attack in Lagos. Rebels attack and set on fire the Atlas Cove Jetty on Tarkwa Bay, which is a major oil hub for Nigeria. Five workers are killed in the strike.

•Oct. 17, Jomo Gbomo says MEND will resume its hostilities against the oil industry, the Armed Forces and its collaborators with effect from Oct. 16.

•Jan. 30, MEND calls off its unilateral truce and threatens an "all-out onslaught" against the oil industry.

•March 15, Two bombs explode at Government House, in Warri, during the Post Amnesty Dialogue, killing eight people and injuring six more. The explosion damages the Government House and other buildings in the area. MEND claims responsibility.