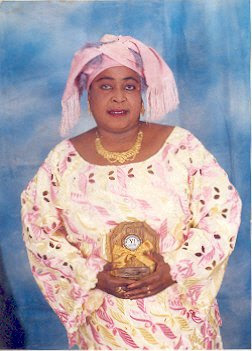 The Hausa film industry was thrown into mourning yesterday with the death of one of the leading actresses, Hajiya Amina Garba (a.k.a. Mama Dumba), who died in Kano.
Mama Dumba, popular with her role as an elderly, responsible mother or wife of a rich man in the movies, died at the age of 52 three weeks after she had remarried.
Her husband of three weeks, Alhaji Abdulkareem Shehu Bauchi, told LEADERSHIP that she succumbed to a long battle with high blood pressure, diabetes and ulcer.

On Saturday, Mama Dumba had been taken to the Gwagwarwa Clinic in Kano metropolis, where she worked as a nurse till her death. She was treated and asked to go home. She was, however, returned to the hospital yesterday when her condition deteriorated and died at about 2:30 p.m.

Her remains were conveyed by her family members to her house at Kofar Kabuga area of the city, where parts of the funeral rites were observed.

She is survived by her husband and five children (two of whom are female).

Shell-shocked colleagues of the late actress showered encomiums on her as she was interred at the Kofar Mazugal cemetery in Kano City.

Administrative secretary of the Motion Picture Practitioners Association of Nigeria, Malam Ahmad Salihu Alkanawy, described the deceased as a true mother whose death has created a huge vacuum in the movie industry. “She has indeed left a large vacuum. She was a real mother who was responsible. We pray Allah in His infinite mercy to forgive her shortcomings,” he said.

On his part, famous actor, Alhaji Ibrahim Maishunku, said Hajiya Amina Garba “was indeed kind; a nice woman whose good manners can be attested to by viewers and those of us who work with her in the industry.”

According to him, the death of Dumba was symbolic, considering the fact that she recently got married despite other people’s opinion about her being too elderly for a fresh marriage union.

He said: “Some people thought she was too old for marriage but Allah has destined that she would die as a complete human being, a responsible married woman.”

Another actor, Malam Jibril S. Fagge, recalled the qualities of the deceased, saying, “Hajiya was a good mother, especially for those of us who knew her and came from the same place as her. I knew her as she knew my parents; she was a kind woman.

“Today is exactly three weeks that she got married, as if she had a premonition that she was going to die. But we believe this was the doing of Allah and we hope Allah will cover her with His infinite mercy.”