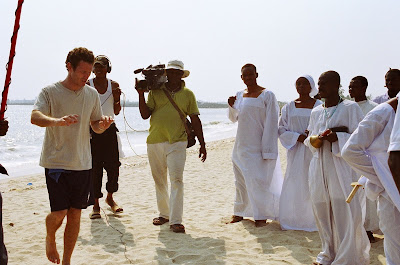 Succour appeared to have come the way of Nollywood penultimate week when, in a rare gesture of goodwill towards the arts in Nigeria, President Goodluck Jonathan announced a $200 million stimulus for the entertainment industry. The money is worth about N30 billion. Speaking in Lagos during the 30th anniversary celebration of the Silverbird Group, the famous entertainment company headed by former director-general of the Nigerian Television Authority (NTA), Mr. Ben Murray-Bruce, the president said the investment was a lifeline "for the exclusive purpose of supporting artistes and developing our entertainment industry."

The move was hailed by many stakeholders in the industry as an intervention that couldn't have come at a better time. They saw in it a clear recognition and honour of the contribution of the talented men and women who have helped to put Nigeria on the world map of entertainment.

Nollywood, the nation's growing movie industry, which can now be regarded as a twin of the equally soaring, though older, music industry, is a global brand from Nigeria. According to a UNESCO report released in May 2009, Nollywood is the third largest movie industry on earth by value, after Hollywood and India's Bollywood. Worth about $250 million and employing about 1 million Nigerians, the industry has created artistes who are household names, nationally and internationally. Names like Genevieve Nnaji, Omotola Jalade-Ekeinde, Ramsey Nouah, Kate Henshaw-Nuttal, Pete Edochie, Ali Nuhu, Segun Arinze, Funke Akindele, etc, are well known. Similar big names abound on the music scene. Consequently, Nollywood has attracted academics from across the world who consider its phenomenal rise worthy of study. Talk of African magic! Indeed, several satellite television channels, including the appropriately named Africa Magic, now offer Nollywood movies 24 hours a day, the way Hollywood movies are shown on stations like Fox Movies or Indian ones on B4U and Zee Aflam. These men and women, most of whom are young, lead comfortable lives in jobs they created for themselves.

For many others, however, the president's gesture was very odd. To them, he acted impulsively - having been begged to do something, anything for the industry, by Mr. Murray-Bruce. In the last two weeks, I have heard questions being asked by stakeholders: Is this a Greek gift? Is it political? Is Jonathan currying the favour of the entertainers as he faces stiff challenge to his leadership? Was his offer inspired by true nationalistic fervour? Is the government coming in to control an informal sector which can communicate political messages not favoured by officialdom? Who will collect the money on behalf of the stakeholders in an industry that has no formal structure or universally recognised leadership?

For now, it is not clear how the money will be shared. The president said the Central Bank governor and the finance minister will handle that. Jonathan, in his speech, alluded to a group called Nollywood, but who, really, is Nollywood? Many reserve it for only those entertainers based in Lagos and Onitsha, but what of the huge Hausa film industry up north, known as Kannywood? And what of other 'Woods' - such as the miniscule, but silently growing Nupe movie industry which does not see itself as a part of Kannywood, as well other small vernacular outfits? Also, what do we mean when we say Nigerian musicians? Do they include those singing in the vernacular, such as Nasiru Garba Supa in Kano and Musa Danbade in Kaduna, or only those Naija crooners such as Dapo Oyebanjo (D'banj), Abolere Akande (9ice), Innocent Idibia (Tuface), 2-Effects and Sound Sultan? Clearly, much needs to be done to sift the grains from the chaff and then determine the modalities for moviemakers and musicians to access the fund. If care is not taken, this government's bonanza would spawn the biggest leadership tussle ever witnessed in the industry and cause divisions between the various "Woods" in the country.

I believe that the industry does not need the largesse. Reason: it came out of the practice by successive regimes to throw money at problems. What the entertainment industry truly needs to develop is a conducive business environment. Remember that Nollywood was created from nothing by adventurous entrepreneurs about 18 years ago with the release of the flick, Living in Bondage, and has grown in leaps and bounds without government money. Of course, it is bedevilled by problems. It suffers from the "Nigerian factor", which includes anything from piracy and insecurity to the poor state of the economy. One of the biggest problems is piracy. The country's lax laws have made it impossible for producers to enjoy the fruits of their labour. They are held in bondage by these thieves. They should be rescued.

Nollywood's ranking by UNESCO's Institute of Statistics as number one in the world is on production volume rather than quality. Nigerian movies are shot on shoestring budgets with cheap equipment. Professionalism is rare because stakeholders lack training, hence the insensitive portrayals of our society as a haven of crime, fetish and exposed flesh. Lax laws and the get-rich-quick nature of Nigerians worsen the situation. Little surprise, then, that only a few Nollywood movies are of value to foreign audiences aside Nigerians in the Diaspora. Consider Tsotsi, the South African movie, or India's Slumdog Millionaire. Tsotsi was made on a $3 million budget and it grossed about $10 million. It also won an Oscar and a Golden Globe for best foreign language film in 2005 and 2006 respectively.

But our movies have poor storylines and a predictable nature. Complaints, as a result, are reverberating across Africa. In Uganda, an MP, Sarah Wasike Mwebaza, blames an increase in witchcraft cases in that country on the influx of Nigerian movies. The Ugandan government is now mulling a bill to address the issue. This shows that our movie makers need to self-reflect and aim at quality in their stories, storytelling style, pictures and sound. They should show the world that their business is not only about making the quick buck but also about art. The bonanza from government should not, therefore, be viewed in monetary terms but as support and recognition. Once regarded as cool cash, it would divide and distract them from business.