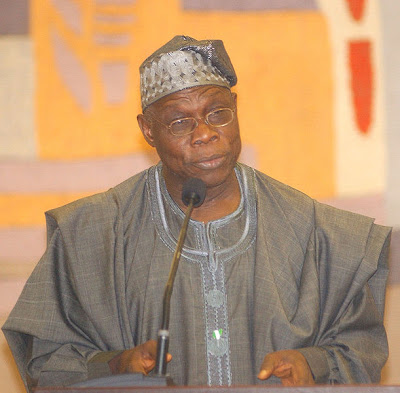 General Olusegun Matthew Okikioa Aremu Obasanjo is one of the luckiest Nigerians. Providence has been so kind to him that he has been able to become almost whatever he had wanted to become. He has been so lucky all his life that his first name should have been Goodluck, not Olusegun. But, yes, ‘Olusegun’ carries with it some heavenly quality, too, because it means “The Lord is victorious”. So, the man has been victorious – over his friends and enemies alike, and over the rest of Nigerians. Apart from being stupendously rich, he enjoys good health; you hardly hear him being rushed into emergency ward or flown abroad for a check on some debilitating ailment. He is also the only Nigerian who ruled the country twice. At least one other Nigerian had tried it and failed, i.e. Muhammadu Buhari, who is still trying.

Obasanjo is also very clever, hence his capacity for leading an intellectual charge even against his worst adversaries. You cannot be dumb and still be able to hold this country by the jugular. Or be the author of several books – Nzeogwu; Not My Will; My Command; This Animal Called Man, among others.

Furthermore, he cheated death many times and seemed to have derived some measure of advantage from his misfortunes. Firstly, he survived the Civil War, in which he commanded the Army’s 3 Marine Commando Division. The war’s fallout, especially the corruption and indolence that set in, conferred on him another opportunity; he became the No. 2 man in the military regime of General Murtala Muhammed. Secondly, Obasanjo was said to have been marked for elimination among some other top military officers in the February 13, 1976 coup d’etat organised by Col. Dimka and Co., but Obasanjo, the then Chief of General Staff, escaped unhurt because the coupists mistook another officer’s car for his. He went on to become head of state because Murtala lost his life in the bloody putsch. Thirdly, he survived the Abacha junta’s gruesome plan for him when he was imprisoned for alleged coup-making. His former deputy, Major-Gen. Shehu Musa Yar’Adua, wasn’t so lucky; he died in prison. Obasanjo not only survived to tell the story, he also benefited from the confusion that followed the whirlwind Abacha years; he became an elected president in 1999.

With these, one expects Obasanjo, arguably a self-made man, to be amply contented. But the man seems to be restless and perennially insatiable for power and riches. His middle name should have been Controversy, not Aremu. If I were him, I would hate the reputation of being the most controversial former head of state, whose every word has the notoriety of leading the headlines the very next day. Indeed, I would not continue to be controversial, mischievous, or unnecessarily courting trouble. Instead, I would be philosophical, staid, statesmanlike. I would be like Gowon or Shagari.

A number of incidents in recent times have shown that the 74-year-old Obasanjo isn’t interested in becoming a statesman in the mould of Nelson Mandela, Jimmy Carter or John Major. His victory in the 2003 elections through massive rigging was one. The second was his failed third term bid. The third was his tackle against Atiku Abubakar. The fourth was imposition of Umaru Yar’Adua as president in the 2007 polls not minding the possibility that the man might die in office, causing an intractable political crisis. The fifth was his clinging to the ruling PDP’s board of trustees as chairman, becoming alpha and omega whose word is supposed to supersede the president’s; remember the attempt he made to change the party’s constitution in his favour. The sixth was/is his continuous dabbling into governance and refusal to allow President Jonathan to rule the country his own way. Time magazine once quoted a Western diplomat saying, while describing Obasanjo’s role in the current political system, “He intends to sit in the passenger seat giving advice and ready to grab the wheel if Nigeria goes off course.” This means the former president believes that he alone has the monopoly of answers to Nigeria’s problems and must of necessity guide whoever comes to rule the country.

What inspired this rumination was the statement Obasanjo made on Tuesday during the PDP presidential rally in Lagos. Four days ago, The Punch reported that the former president told the crowd at Tafawa Balewa Square that next month’s general election is a do-or-die one. The translation of a song he sang in his native Yoruba that day says: “Obasanjo cannot condone, Obasanjo would resist if we vote and we don’t win.” Simply put, Obasanjo was saying that the present administration was admitting the possibility of its losing the election but would not accept Nigerians giving their mandate to any candidate other than Jonathan.

The newspaper recalled that Obasanjo had made a similar but much clearer threat during the build-up to the 2007 election. On February 10, 2007, during a meeting of PDP stakeholders in Abeokuta, Obasanjo had said that the elections were a do-or-die affair for his party. “This election is a do-or-die affair for me and the PDP. This coming election is a matter of life and death for PDP and Nigeria,” he was quoted as saying. Pray, how cruder could a former leader be? Many analysts were quick to point out, in retrospect, that the massive rigging that characterised that year’s elections had been carefully planned months earlier and brutally executed by Obasanjo and his goons.

Are we seeing a replay of that scenario? The goings-on in Ogun State, where the former president is pitted against the state governor for the control of the party’s machinery, attests to Obasanjo’s do-or-die propensity. Add that to the unguarded statements Chief Tony Anenih and some other PDP apparatchiks are making during the ongoing hustings, and your puzzle is solved. Surprisingly, Jonathan’s song is different. As opposed to his elders’ chest-thumping, the president has been preaching the gospel of peace, promising free and fair polls and his readiness to quit if he loses. But who should we believe – the commander-in-chief or his commanders who hold the nation by the jugular?

---
Published on the back page of LEADERSHIP WEEKEND, last Saturday
Posted by Bahaushe Mai Ban Haushi! at 14:43

OBJ, an Animal Called Man, continues to amaze me. My submission is that he is either neurotic or psychopathic.