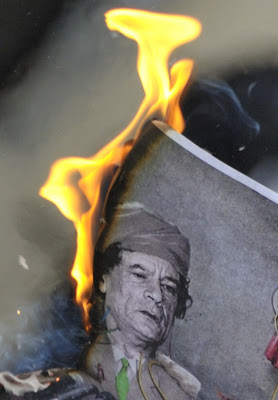 – Saif al-Islam Gaddafi, son of Libyan strongman Muammar Gaddafi, talking to CNN yesterday on the ruling family’s option in the wake of the deadly protests in the North African country.

Four men have in recent times defied the demands of their countrymen to vacate their presidential palaces so that a system that would lead to the creation of all-inclusive governments in their countries could be instituted. These men are Zine El Abidine Ben Ali of Tunisia, Hosni Mubarak of Egypt, Laurent Gbagbo of Cote d’Ivoire, and, last but not the least, Muammar Ghaddafi of Libyan Arab Jamahiriya. It is no longer news that while the first two have kissed the dust and bolted, the others are staying put, insisting on protecting their dubious mandates with the last drop of their blood. Gbagbo is holding out against his rival Alassane Ouattara, who won the country’s presidential election but has been denied his mandate, and the international community which has consistently condemned Gbagbo’s refusal to step down. Violence has continued to rock the West African country. Just two days ago, gunfire was exchanged in the Ivorian capital Yamoussoukro between security forces loyal to Gbagbo and residents in an area loyal to Ouattara. The United Nations High Commission for Refugees (UNHCR) reports that at least 20,000 people fled the conflict-torn district of Abidjan yesterday and sought shelter in other parts of the city.

These men seem to have no ears to listen to reason. Both Ben Ali and Mubarak had vowed to fight till the end, offering to attain martyrdom, a message now being echoed by Gaddafi. Yes, there are many more of such men in Africa and in the Middle East. But they can no longer deceive their people with rhetoric of nationalism or anti-Americanism. People want a change from dictatorship to democracy. Yemen, Bahrain, and Jordan are already catching the Tunisian cold as tens of thousands of people took to the streets yesterday to demand political reforms. Their rulers’ savage response does not cow them.

As at now, the Libyan conundrum, which the world is watching more keenly because of the high stakes involved, appears to be going the way of the ones that took place in Tunisia and Egypt since January. Which makes it permissible to say that Gaddafi’s days in power are numbered. In spite of his and his son Saif al-Islam’s braggadocio, the president is gradually losing control of the levers of power, with large chunks of the country being taken over by rebellious protesters. His government, like Mubarak’s, is woven around an outdated power structure built on family and tribal loyalty. But years of dictatorship has made such a structure untenable in the modern age. The world has changed, but these iron-fisted dictators in Africa and the Arab world appear not to know that. However, you cannot rule a people for longer than necessary without committing human rights abuses. The people will not want you to be there longer than normal because no matter your sterling achievements or how paternalistic your regime is, they would want to have some fresh air.

Gaddafi is bound to fall because all the main characteristics of the successful revolutions in Tunisia and Egypt are present in the unfolding tumult in Libya. One, the Libyan people are amassing in various cities demanding for the president to leave. Two, various nationals are fleeing the country just as the crisis escalates. Three, top members of the regime are withdrawing their services. They included Libya’s Mission to the United Nations in Geneva, who resigned their post as official envoys of Tripoli in the middle of a special session of the UN Human Rights Council yesterday, specially convened to discuss possible sanctions against Libya.

The county’s delegation to the Arab League, also yesterday, in Cairo, renounced links to Gaddafi and said they now represented the will of the people. The delegation changed their name to "the representative of Libyan people to the Arab League." Four, support by the international community, which is key to the survival of any dictator, is being lost by the hour. There is full coordination to fell the regime, using diplomatic and media power. Libya is on a round-the-clock loop on international broadcasters like CNN, Aljazeera and BBC World, which played a significant role in bringing down the authoritarian regimes in Tunisia and Egypt. France is imposing full sanctions. America and Britain have withdrawn support. The United Nations, through its specialised agencies, are applying the heat. The UN Development Programme dropped Gaddafi’s daughter, Aisha al-Gaddafi, as a goodwill ambassador following the crackdown on anti-government protesters. UN secretary-general Ban Ki-moon blasted Gaddafi for ignoring his call to stop violence against protesters, which the UN chief stressed to the Libyan leader during a 40-minute conversation this week.

The double-dealing in diplomacy is glaring once again. Both the U.S. and the EU have supported authoritarian regimes in Africa and the Middle East because of their enlightened self-interest. Their interests are in gaining access to oil, immigration issues, regional security, terrorism and checking Islamic resurgence globally. Gaddafi has never been in their good books anyway like, say, Mubarak. He has always been regarded as a pariah. Now, it is easy to justify his ouster. The contagion of the Tunisian catarrh will not spare him – or any similar dictator, for that matter. Power is returning to the hands of the people, finally.