After Libya, which country is next? 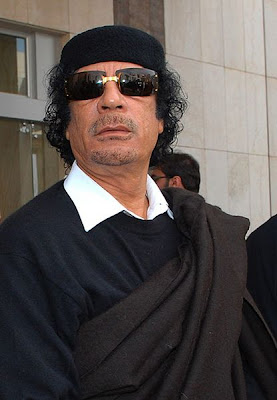 – Saif al-Islam Gaddafi, son of Libyan leader Muammar Gaddafi, talking to CNN on February 26 on the ruling family’s option in the wake of the deadly protests in the country.

By all accounts, Libya has just entered a new era, with the brutal killing of Col. Muammar Muhammad al-Gaddafi last Thursday by the country’s rebels at his hometown of Sirte. My predictions in two previous columns on Libya that the current status in that country would be reached in the months to come have now proved almost prescient. All the ingredients of this tragic end were there – some for decades. Gaddafi’s 42 years in power had made him the world’s fourth longest-ruling non-royal leader since 1900, as well as the longest-ruling Arab leader. No matter how benevolent his regime, his autocracy could no longer be sustained in the modern world.

In my first piece on the Libyan tumult, titled, “Men Without Ears,” published on the back page of Leadership on February 26, 2011, I argued, “As at now, the Libyan conundrum, which the world is watching more keenly because of the high stakes involved, appears to be going the way of the ones that took place in Tunisia and Egypt since January. Which makes it permissible to say that Gaddafi’s days in power are numbered. In spite of his and his son Saif al-Islam’s braggadocio, the president is gradually losing control of the levers of power, with large chunks of the country being taken over by rebellious protesters.”

In my second column on the issue, titled “The Way the Cookie Crumbles,” published in Blueprint two months ago when Gaddafi finally went into hiding, I wrote: “One wonders what becomes of the North African country in the post-Gaddafi era. The West must avoid making its Iraq mistakes after it toppled Saddam Hussein in 2003. Since the purpose of Gaddafi’s ouster is to give Libya a better future, the change should not be geared solely towards serving Western interests. To achieve this, no foreign troops should be allowed in... Libya should become a democratic nation whose Islamic identity is preserved. It should never become a family-centred dictatorship with a tunnel vision for development again if the overthrow of Gaddafi’s superstructure must be justified.”

Now that Gaddafi is gone, Western countries that backed the insurrection against him are lining up to exact their interests with more zeal. The country has the largest oil reserves in Africa. Now we will see if Libya’s National Transitional Council, which is putting together a government, have done what they did out of patriotism. If they mortgage Libya’s sovereignty to foreigners, then it is up to the ordinary people to give them the “Gaddafi treatment.”

This means that it is not over yet in Libya until we see what the new leaders are going to do. Is it democracy or another dictatorship woven around some cabal with pecuniary interests? Are the new leaders, in order to fulfil their pledge of “modernising” the nation, going to build a system based on the cultural and religious values of the people? Or are they, as many analysts fear, going to make Libya the 53rd state of the U.S.? The 51st and the 52nd states are Israel and Afghanistan respectively, of course!
I have other worries. After Libya, which country is next? Syria quickly comes to mind. The country is also in the throes of the so-called Arab Spring that revolutionised Tunisia and Egypt. Beyond Syria, however, the West is expected to be looking around at other “soft” targets where its Dracula could find cheap blood or, if you will, oil. Look around, and you will see Iran in the horizon. Or Nigeria, for that matter, which a U.S. intelligence report predicted would fall apart in a few years’ time.

In a new poll by the daily Kommersant, Russian experts cited Syria, Iran, Yemen, Venezuela and Nigeria as possibly the next in the line of countries likely to follow in Libya’s footsteps. One of them, State Duma Deputy Vadim Solovyov of the Communist Party faction warned that the American economy is in need of inexpensive oil, so the U.S. is ready to wage wars in order to get it. He specifically argued that any country with large reserves of energy resources such as Iran, Syria, Venezuela or Nigeria could come next.

Another Russian expert polled by the newspaper was the deputy head of the Liberal Democratic Party faction, Maxim Rokhmistrov, who said: “What we have been witnessing is a redistribution of spheres of influence, where the United States is the main player.”

Are we ready to play a Gaddafi if such eventuality happens, knowing that we have many rebellious types? My take is that Nigeria’s divisive nature, plus the various militant wars going on, makes us an easier target than Libya or Iran, both of which had resisted decades of Western machinations. Surely for our leaders, the time to be sleeping with one eye open is here. Cold comfort, the Americans are already here.
Let’s pray.

Compliments of the season Ibrahim,
Please, contact me on http://screennaija.projectionfoundation.org/. I need your knowledge on the movie theatres in northern Nigeria. The outdoor cinemas still functioning today.

Your positive response would be highly appreciated.