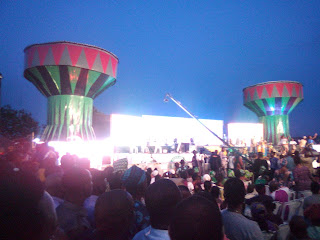 Tonight I attended the successful opening ceremony of the third edition of the annual African Drum Festival (ADF), currently going on in Abeokuta, the capital of Ogun State. I had travelled this afternoon from Lagos, where I stayed for three days for official duties.

In fact, I had no intention of coming to Abeokuta even though I knew about the preparations to host the festival. Some weeks back I was contacted by Malam Salihu Bappa, a senior lecturer at Ahmadu Bello University, Zaria, who is an old acquitance of mine. He wanted me to get a way to contact the lead drummer for the late Alhaji Mamman Shata. The task was right down my alley, having been associated with anything Shata for at least two decades. One of the organisers of the ADF, Mr. Jahman Anikulapo, was the one who had tasked Bappa with finding the drummer. Malam Bappa himself has been associated with the culture circuit for as long as I knew him. And Jahman is a well known "culture connossieur", having served as the Arts and Media Editor of The Guardian and, later, the Editor of The Guardian On Sunday. We knew each other long ago, myself having been in the culture loop for many years as a journalist.

I was able to reach out to Shata's chief drummer through Malam Mustapha Shata. The drummer is of course Malam Magaji Mahuta, an octogenarian who is in retirement in his village near Funtua, Shata's base. The ADF organisers wanted him to attend the three-day event in Abeokuta, and he did. He arrived Lagos last night, together with an escort, Muntari Shata, the music legend's second to the last child. I should mention that they came together on the same Kaduna-Lagos flight with Malam Salisu Mashi, a famed drummer based in Katsina. Mashi, who had worked with the Centre for Nigerian Cultural Studies, ABU, Zaria, in the 1970s and 1980s, had attained prowess for his incredible capacity to play several Hausa musical instruments all at once and at the same time. 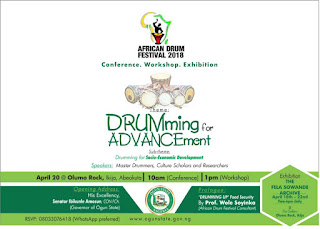 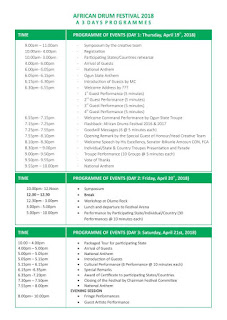 The ADF began in 2016 as a local event but it has become an international one with participants attending from several African countries. At the opening ceremony tonight, which took place at the June 12 Cultural Centre, Ibara, I saw contingents from Ghana, Cote d'Ivoire, Senegal, South Africa, etc., as well as from many states of Nigeria. I learned that this year's edition, though the third, is actually the second international one.

The opening ceremony was a huge carnival, with so many contingents operating various forms of drums and delivering razzmatazz. There was a cacophony of music as the musicians played at the same time. A snake charmer was seen plying his trade with a huge python.

Many speeches were delivered, all stressing the importance of culture to the human society. Governor Amusun pledged his government's continued support for the ADF.

The traditional rulers who spoke included the Ooni of Ife, the Alaafin of Oyo; Alake of Egbaland, and the Obong of Calabar.

Nobel laureate Professor Wole Soyinka was the cynosure of all eyes as he pulled his famous grey crown through the crowd to deliver his speech. He is the chief consultant for the event.

The turnout was impressive. It reflects the hard work the organisers put in publicising the event, which is evident in the banners that dotted the cityscape right from inside Lagos.

I and the rest of the audience were mesmerised by the whole spectacle. There was a captivating musical performance by the Ogun State Cultural Troupe to kickstart the show. Amosun declared the festival open with the beating of drums by himself and the cry, "Let the Festival begin!" Shortly after, there was a scintillating display of fireworks which further excited the audience.

The taste of the pudding is in the eating, they say. The foretaste is what will follow in the next two days of the festival has been served. The festival has begun. Tomorrow the drums will surely roll some more.
Posted by Bahaushe Mai Ban Haushi! at 15:57