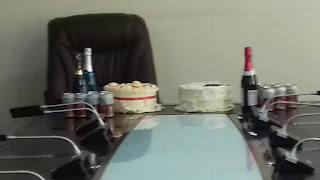 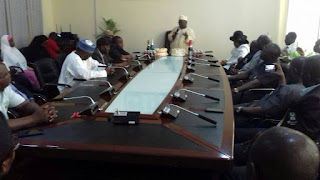 For the third time running, the Vice-Chancellor of the National Open University of Nigeria (NOUN), Prof. Abdalla Uba Adamu, today celebrated his birthday with staff of the institution. As it happened last year, today's event was a surprise one for him because he was not told about it beforehand.

The celebration took place inside the VC's conference room, with staff coming from the various faculties, departments and units.

They included most of the principal officers, many directors, heads of units and several middle level and junior staffers.

As he stepped into the room, Stevie Wonder's 1980 hit song, "Happy Birthday", broke out from the sound system. 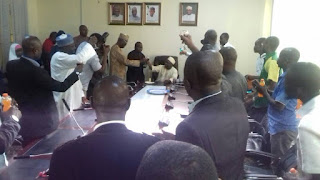 In an appreciation speech, he thanked everyone for their contribution to his unfolding success in administering the only single-mode Open and Distance Learning (ODL) institution in the country, saying he couldn't have done it all alone.

He particularly singled out several persons and narrated what they meant to him and to the university.

Prof. Adamu cut a cake to much cheering and claps, and the glasses clicked as a toast was offered by Prof. Samaila Mande, the Dean of Postgraduate Studies.

Prof. Adamu assumed office in 2016 for a five-year tenure.
Posted by Bahaushe Mai Ban Haushi! at 12:00