The Meaning Of People’s Power 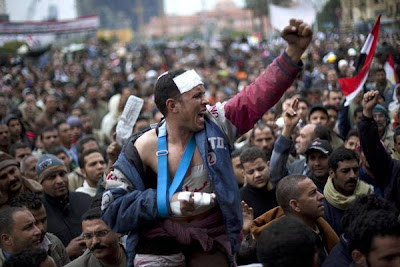 “Congratulations Egypt, the criminal has left the palace.”


The meaning of people’s power manifested itself in yesterday’s overthrow of Muhammad Hosni Mubarak as president of the Arab Republic of Egypt. My column last week, titled “As Another Pharaoh Falls...,” was unequivocal that Mubarak was pretending to be a born-again democrat with his promise to quit during the general elections in September, but he was too late. The mammoth crowd at Tahrir (i.e. Freedom) Square was too determined and focused to be brushed aside by the government’s goons. It was composed mostly of young men and women, many of whom were scarcely out of their diapers when Mubarak took power in 1981. They are educated politically, exposed to the heady ways of the modern world, internet-savvy, angry, impatient with the slow wheel of governance, fed up with the three-decade one-man show, and thirsting for change at all cost. This is a Facebook generation that marries the amazing potentials of internet social networking with the borderless powers of satellite television. Any dictator who ignores the power of this kind of agitators does so at his/her peril.

Mubarak tried some dirty tricks to cling to power. As a sign that he realised the influence of those Western tools of information, he briefly unplugged Facebook and sacked Aljazeera television, all to no avail. Nothing worked; not even the threat of his military commanders against the protesters, the incoherent blandishments of Vice President Omar Suleiman (described by opposition figure Mohammed El-Baradei as Mubarak’s “twin”), the desperate attacks by Mubarak’s supporters or his deceptive speeches to the people on February 1 and 10, vowing to remain in office for the next seven months. He clearly under-estimated the depth of resentment against his vile regime. With the nation crying out in unison, and thousands refusing to go to work, effectively shutting down the country, his hours – not days – were numbered.

His resignation yesterday was another proof of the people’s power. A similar scenario had happened in the Philippines in 1986, inspiring the revolutions of 1989 that ended communist dictatorships in Eastern Europe. No, not in the Arab world – or in Africa, for that matter – where rulers play deities. Well, until lately. Today, the Arabs are asking hard questions and plotting to unseat their unpopular rulers. It happened last month in Tunisia where a popular revolt forced the president into exile. But no one thought that such could succeed in Egypt, the West’s formidable ally in the region, more so with Mubarak, whose granite presence and pharaonic powers were comparable only to those of Iraq’s maximum ruler, the late Saddam Hussein. But it has happened! The people have spoken.

Even then, Egypt has a long way to go. The big man is out, but the canvass on which his rule was etched – the faceless military brass – is firmly in place, making the system an anathema to responsible, representative and accountable governance. Human rights could continue to be abused. Opposition voices could be silenced. Two, the fear by Western governments that the country’s largest opposition party, the Muslim Brotherhood, may assume power is a threat to the people’s will. Westerners want Egypt to remain within their sphere of influence because of its role as a bulwark against Islamic radicalism. German premier Angela Markel warned yesterday that Egypt must remain friends with Israel. American extremist personalities such as Glenn Beck, whose views are as threatening to world peace as those of, say, Al-Qaida, believe that the turmoil against Mubarak was part of an international Islamic resurgence sweeping all the way from Asia to England. “This isn’t about Egypt,” said Beck, a top-rated television personality with a large following in America. “This is the story of everyone who has ever plotted, or wanted, to fundamentally change or destroy the Western way of life.” This view was echoed by other influential establishment figures, such as Republican strategist Newt Gingrich, who said, “The Muslim Brotherhood is a mortal enemy of our civilisation.”

Is it not funny that Western conservatives aren’t interested in seeing democracy in the Middle East simply because the leaders preferred by the majority of Arabs are considered too radical by the West? Western extremists prefer those paternal dictatorships in the region, turning a blind eye to the harsh realities of the people’s lives because the rulers are their stooges.

Then, there is the economy, which Mubarak failed to develop due to his obsession with security. Geopolitics – ranging from rapprochement with Israel to fighting Islamic radicalism – was his best game. Whoever becomes the new leader of Egypt will, therefore, find the economy a hard nut to crack. Of equal importance is the challenge of cultivating a genuine democratic culture based on the nation’s religious heritage. There is evidence that a tenured electoral system can be grown in Muslim nations. U.S. president Barack Obama is toeing a line long spurned by successive American governments, i.e. Arab nations should democratise. This line, if genuine, promises much. For, it is in the absence of choice by the public and imposition of natural rulers in the name of religion or security that some elements resort to extreme measures, such as bombing an airliner or detonating a grenade on a bus. To achieve this, the West must allow the Arabs to choose their leaders in free and fair elections. The revolution in Egypt has shown that the age of propping up dictators to serve extraneous (read: Western) interests is gone. The youths will always ask the hard questions.

This message should sink in in Africa, too. And why not? We have veritable dictators camouflaging as democrats. Others are emerging. The youths of Africa, Black Africa, should emulate their counterparts in the north; after all, Tunisians and Egyptians are Africans, too. They should ask the hard questions and push for a change where necessary.

----
Published in my back page column in LEADERSHIP WEEKEND, today.
Posted by Bahaushe Mai Ban Haushi! at 11:40

Thanks, Alkalami, for this useful observation. Will watch out.