Taking The Devil Out Of Plateau 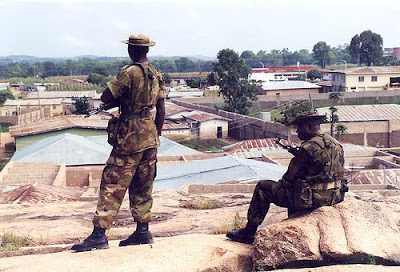 The Devil has found an abode in Plateau State. He exploits human frailties and plants doubts, distrust, hatred and revenge in people’s hearts. He finds hearts filled with prejudices and pours in venom. Then he fuels the accumulated anger, heating it to a level where it must burst into violent rage, remorseless killings and destruction. The Devil laughs whenever we discard the love which binds us as a community and is joyful that he can use us to destroy our societies. He lures people onto destruction and, finally, Hell. Isn’t the Devil man’s enemy?

Jos is hellish today because the Devil is there. Jos is almost no longer fit for human habitation. It is a war zone in a jungle, where people live in fear. Human life no longer has any sanctity. Death stalks the city, even in the interludes of peace, like the promise of acid rain. Today, even policemen and soldiers, on whom the civilian population depends for protection, are afraid to serve there. A report published in LEADERSHIP yesterday said that 52 cops had been killed in the crises that rocked the city since 2002.

It is most unfortunate that the Devil lives in Jos because, first, it is a beautiful city; the Devil should display his wares in ugly places. Second, Jos used to be very peaceful, hence people from all over the world made it their home, making it the most cosmopolitan town in northern Nigeria. In the past, people ran to Jos whenever there was sectarian violence in Kano or Kaduna. Third, the Devil shouldn’t have been living there because it is home to some of the most religious people in Nigeria. It has been a missionary hub since colonial times. Christian and Islamic evangelists regarded it as an important base in their task of spreading the Word not only in the old Benue-Plateau area but also across northern Nigeria.

So, how could the Devil, that most accursed creature, find a safe haven in this idyllic place, the city of pastors, reverends, malams and sheikhs? Who gave him a permanent residence there, a base from which people carry machetes, knives, swords, cudgels – and now bombs – to send one another to the great beyond? Who are his landlords on the Plateau? Politicians blame politicians for the crises. I want to agree because in the past, before politics was used to divide the city, ordinary people lived together in peace, eating together, partying together and sleeping together. Many inter-married.

To drive the Devil away, our leaders must find the so-called politicians who instigate this murderous conflict. Everyone agrees that some high-level personalities are culpable. But who are they? They should be named and severely punished, together with their errand boys, the killers who carry out the attacks.

Another point on which everyone is agreed is failure of leadership. This contributed much to the crisis. Meaning what? The Jonathan administration has refused to declare a state of emergency there. It is only paying lip service to the crisis. The state government has also failed to embrace every resident as a Nigerian citizen. Instead, it is mouthing phrases like ‘settler’ and ‘indigene.’ Where was this deadly dichotomy in years past when the people lived together as brothers and sisters?

This failure of leadership has been linked to the governance style of Governor Jonah David Jang. A wide spectrum of opinion in and out of Plateau is agreed on one indisputable fact: Jang is part of the problem – if not THE problem – in the resolution of the Plateau conundrum. His failure to provide statesmanlike leadership in his domain, by either wilfully fanning the embers of the crisis or from sheer incompetence, has been an obstacle in the way of finding a lasting peace. Many Christian leaders who are not afraid to tell the truth believe that the governor is pitifully incapable of solving this seemingly intractable problem; instead, he has been chasing shadows – such as blaming his opponents within his own political party. This gargantuan failure is responsible for the unending calls from both sides of the divide for the imposition of a state of emergency in the state.

Jang should show statesmanship, as any conscientious leader should, by not regarding himself as a factional leader. He should accept that his four years as governor have brought only death and destruction, and that renewing them would have a long-term implication for interreligious harmony not only on the Plateau but also in the rest of the country. It could redefine the future of cohabitation in the country. All civilised nations are becoming multi-ethnic and multi-religious. Jang should accept that he has had enough of this madness and allow another person, who could even come from his village, to become governor so that, perchance, a sea-change would occur.

This all-important decision may not be Jang’s alone; community leaders nationwide should help him decide. Because it is for the common good, they should impress it upon him that a new leadership is needed to address this unfortunate tragedy, a leader with a new vision of how peace could return; a leader untainted by the divisive politics of the moment. Any other governor in Plateau would be more trusted than Jang, who wears a cloak of suspicion and distrust. It is important to know that Jang cannot protect anybody; was he not there, with all the executive powers and funds, when hundreds of Christians and Muslims were killed and properties destroyed as if in Beirut, Baghdad or the Gaza Strip?

If Jang refuses to see the light and decides to carry on at all cost, then the good people of Plateau State must vote him out this year. In a democratic dispensation, and with the promise of free and fair polls, any recalcitrant politician must be shown the door by the electorate in a peaceful manner. Voting for Jang would mean voting for four more years of conflict. That would mean giving the Devil the licence to continue to stalk this picturesque state, causing mayhem and genocide. Jang should help his people – Christians, Muslims, Berom, Hausa, etc. – to expel Satan.

Am highly impressed with ur write-up. This is exactly the true picture of everything. There is nothing compiled here rather than basic facts. We like people like you,very open-minded,who can come out and throw out 'unearthed-facts' for the consumption of the general public. This is indeed a good hand aswell as a reasoning mind's work! Keep the good work,bros. We shall always be on your side whenever you let the cat out of the bag. More grease to your elbows,'BAHAUSHE MAI BAN HAUSHI'! 'Allah yayi jagora'.

Your assessment of the situation on the Plateau and Governor Jang is heavily biased. You are the type that is causing more crisis. Whether you like it or not, Jang has more supporters on the Plateau, and his supporters will not fold arms to watch blackmailers push him out. The truth is Bahaushe in Jos North benefitted tremendously during Military era and thought things will continue as usual, no matter the freequency of change of leadership, if it is democracy, settlers will have to play the game by the rules and accept the voice of the majority. With boko haram crisis, have you adviced any Northern Governor to resign? We are not the way you prefer to see us.

I beleive that one day the devil will not get a place to hide in platuea...because the peace loving people of platuea will join hand and fight him.

Wether you like it or not Muslims{u use to hide& said Bahaushe}is not a settler in Platuea and will never be a settler till the end of this world,and I beleive that one day the devil will not get a place to hide in platuea...because the peace loving people of platuea will join hands and enough is enough.