You Call That An Election? 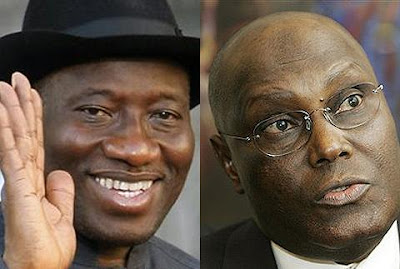 Yes, the special convention of the Peoples Democratic Party had all the trappings of a free and fair election. Delegates who were going to choose the party’s candidate for the April election were screened and got accreditation in the presence of agents of the three aspirants; votes were cast in the open and into transparent ballot boxes; the counting was done in similar fashion – in the open; the aspirants’ agents were present throughout and were permitted to put in a word if necessary. The aspirants had been invited to tell the delegates what they had in store for the nation. Above all, the whole event was televised live on the NTA, Africa’s largest TV network whose signals are beamed across the globe. You couldn’t have watched this event at the venue or on TV and not be impressed by the meticulous manner in which it was organised. But was it free and fair? Did President Goodluck Jonathan defeat Alhaji Atiku Abubakar fair and square, to borrow from Malam Adamu Ciroma’s description of Chief MKO Abiola’s victory in the presidential election of 1993?

To be free and fair, an election must be truly free from the encumbrances imposed by party stalwarts and government officials, such as intimidation, coercion or blackmail. The voter should be able to exercise his free will, relying on the faith he has in the stated manifesto of the candidate. He has to be persuaded by his conscience that the candidate will serve the collective interest of the community or nation. He should not be compromised by financial inducement, promise of goodies or threat to his privileges. If one applies this clear definition to the event that spanned Thursday to yesterday morning, one would no doubt laugh over what the PDP apparatchiks called a free and fair election. To begin with, the outcome of Jonathan’s victory had been decided long before the party delegates began to arrive Abuja by state governors who believe that whatever they do is in the national interest and that they are acting on behalf of the multitudes. In this primary election, the delegates were mere sheep and their state governors the herdsmen. They were simply commanded to vote for each governor’s choice, which was not necessarily their own choice.

It was during such decision-making that both the stick and the carrot were wielded. Loyalty would be handsomely rewarded while independence of choice, regarded as betrayal, would attract severe sanctions. In our impoverished country where most people go for where their bread is buttered, it is easy to see loyalty than ‘betrayal’. This is why the governors, who control the purse-strings of their states, are the key element in any election in Nigeria. Former governor Donald Duke had told us how it is done, in a bare-all interview he granted The Guardian last year. And only recently, one of the leading chieftains of the PDP, Chief Tony Anenih, who goes by the sobriquet Mr. Fix It (with an added “Slouching an AK-47 of Dirty Tricks”) promised the party’s faithful in Benin City that anyone who dared to vote for Atiku in the presidential primaries would be fished out and punished. Surprisingly, this threat from a man notorious for carrying out to the letter what he intends to do was glossed over by most people, even by the Atiku camp.

Another hat-trick scored by the organisers of the event was the categorisation of the delegates state by state. Ostensibly, this was done in order to make for an easy accreditation and counting. However, it is easy to surmise that this arrangement had forced a precondition on the voters: vote for who your governor told you or we will find out. Now it is possible to know which states “liked the president most” and which ‘betrayed’ him. One could see Governor Isa Yuguda almost sweating as the Bauchi tally was being given; Yuguda, a staunch supporter of the president, has had his delegates giving Atiku as many as 44 votes. Even though Jonathan won by just 2 votes, questions are legion over the governor’s real control over his delegates or even his real loyalty to Aso Rock. This kind of regimentation has played in Jonathan’s favour by intimidating delegates into falling in line. Of course, we are not expected to call this a rigging of the votes because what it did was to rig the voting system from day one.

The next issue is money. We have all seen how the media made a kill in the advertising market in the run-up to the primaries. But those who made the biggest kill were the delegates to the convention. I have personally talked to some of the delegates, who confided in me that huge amounts were shared among them. Right from home, they collected all sorts of monetary gifts. Their trip, accommodation and feeding were sponsored by their governors. They received a lot of blandishment on what and what not to do in Abuja. “It was like being in the army,” one told me. “You were given orders, and no questions were brooked.” Another delegate confided in me that on arrival in Abuja, they were accosted with Atiku’s gift – US$3,000.00 per delegate – but, then, that gift became chickenfeed by the time Jonathan’s windfall came – US$7,000.00 per delegate. If you were smart enough to collect from the two camps, as many delegates did, you became US$10,000.00 richer. Still, my findings indicated that this monetary inducement was not the real deciding factor in the end; the state governor’s decision was the one.

And you ask: why did the governors have to back Jonathan in this primary? Have they not got their own ticket? Yes, they have, but they also knew that their political fate still hangs in the balance; until the April elections are done with, there are many minefields ahead. For most of them, it was safer to play by the rules of the game as spelt out by the party, the presidency and the strange bedfellows parading themselves as the pro-Jonathan bulwark. Any wonder, then, that Jonathan was able to win 80 votes to Atiku’s 1 in Abia, and 141 - 0 in Akwa Ibom, 67 – 0 in the president’s home state of Bayelsa; 105 – 0 in Cross River and 128 – 2 in Rivers?

Rules or no rules, the game – call it war – has just begun. Whoever organised Thursday’s primary this way is determined to give Jonathan victory in the next two months. The taste of the pudding is in the eating. It would be interesting to see how Atiku, who must have been humbled by his defeat in spite of all the reminders he read out to the delegates on the (s)election night, will fight back.
Posted by Bahaushe Mai Ban Haushi! at 10:35

What a must read article. More grease to your elbow.